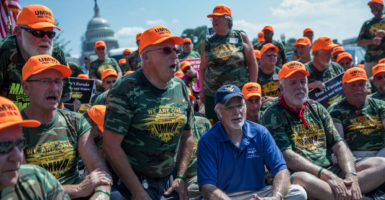 United Mine Workers of America International President Cecil Roberts and members of UMWA sit in civil disobedience prior to being arrested in a parking lot on the West Front of the U.S. Capitol in Washington, D.C., Sept. 8, 2016. The rally was held to urge Congress to pass legislation to preserve benefits for retired coal miners and widows. (Photo: Shawn Thew/EPA/Newscom)

The United Mine Workers of America—a roughly 100,000-member coal mining union—is lobbying hard for a taxpayer bailout of its underfunded pension plan before the end of the year. And it’s already well on its way.

The Senate Finance Committee passed S.1714, the Miners Protection Act, out of committee on Sept. 22.

The UMWA’s pension plan for coal miners is vastly underfunded. It has less than half the money it needs to pay promised benefits and is projected to run dry by 2025. Despite this mismanagement, the UMWA has also managed to provide its officers and non-coal worker employees with a pension that is 100 percent funded.

If the UMWA was able to secure a healthy pension fund for itself, how did it end up pushing the pensions of nearly a 100,000 coal miners to the point of no return?

The UMWA’s first and fatal mistake was fighting vehemently to pay pension benefits to workers who did not earn them. Almost immediately after the plan was launched, it started paying benefits to retired workers who had never accumulated pension contributions. This put the pension plan off kilter from the start.

The UMWA’s second failure was consistently promising significantly larger benefits than could be supported by employers’ contributions. The UMWA’s plan did this by assuming unrealistic investment returns.

While non-union private pension plans must use a government-prescribed and realistic interest rate, unions enjoy regulatory favoritism that allows them to use whatever interest rate assumptions they want when running their pension plans.

By exploiting unreasonably high interest rate assumptions, the UMWA plan trustees (made up of equal representation from the UMWA and coal industry representatives) created a win-win for themselves: The UMWA delivered significant pension benefit promises for its members, and coal industry employers did not have to contribute enough to actually fund those promises.

The losers will be UMWA members and the taxpayers who could end up supplying the bailout.

The UMWA puts most of the blame for its pension failure on the massive decline of the coal industry. But if a plan is properly funded from the start and appropriately managed along the way, it wouldn’t matter if the entire coal industry were wiped out—the benefits workers had already earned would still be there.

The real problem is that the UMWA did not properly fund its plan from the start or adjust it along the way. Many other union-run pension plans have also failed in this regard, and now hundreds of billions of dollars in promised benefits are not there.

The fault lies with those who manage these union pension plans. The comparatively well-funded pension plan of the UMWA’s own officers and employees suggests that unions actually do know how to run well-funded plans, but have often chosen not to do so unless it’s their own pension on the line.

While it is a tragedy that UMWA and other union workers will end up receiving significantly less than they were promised, a bailout would only encourage other plans to break their pension promises.