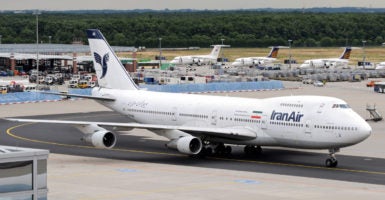 The House passed a bill that would block the sale of aircraft to Iran. The legislation also prohibits the Export-Import Bank from providing any assistance either directly or indirectly to Iran or associated entities. (Photo: Mauritz Antin/EPA /Newcom)

House Republicans voted Thursday to block the sale of aircraft to Iran, a move GOP lawmakers and some Democrats said would protect taxpayer dollars from being used to finance the export of airplanes to Tehran.

The House voted 243 to 174 to pass legislation sponsored by Rep. Bill Huizenga, R-Mich., prohibiting the secretary of the Treasury from authorizing a transaction from a U.S. bank or financial institution related to the export of aircraft to Iran.

The White House said it would veto the bill, as it could be viewed as a violation of the Iran nuclear deal.

In September, the Treasury issued licenses to aviation giants Airbus and Boeing that permitted the sale of planes to Iran Air, the country’s state-owned airline. The agency also allowed U.S. banks to finance the sale of those aircraft to Tehran.

“This bill would keep Americans’ deposits away from a country that the president’s own State Department calls ‘the foremost state sponsor of terrorism,’ and which Treasury has designed as a ‘jurisdiction of primary money laundering concern,’” Huizenga said today on the House floor.

The legislation also prohibits the Export-Import Bank, or Ex-Im, from providing any assistance either directly or indirectly to Iran and associated entities, including its state-run airline.

Over the last year, Roskam has been an ardent opponent of the Iran deal and has pushed to prohibit Iran and its state-run entities from benefiting from U.S.-backed financing.

Though Ex-Im’s charter prohibits the agency from extending taxpayer-backed financing to Iran, Roskam and GOP lawmakers cautioned a loophole could allow Tehran to purchase U.S. products or services from third-party intermediaries that received funding from the 82-year-old bank.

It’s now possible for U.S. corporations to do business with Iran following the Obama administration’s historic nuclear deal with the Islamic regime. The pact, which the U.S. and five other world powers secured last year, was designed to ensure Iran doesn’t obtain a nuclear weapon in the near future.

Nearly a year after negotiations with Iran concluded, lawmakers learned that Boeing, one of Ex-Im’s biggest beneficiaries, had been engaging in ongoing discussions with government-run entities in Iran over the possible sale of aircraft to the country.

In May, Roskam and fellow Illinois Republican Reps. Robert Dold and Randy Hultgren sent the Chicago-based aerospace giant a letter urging it not to do business with Iran.

One month later, Boeing confirmed it signed a deal to sell $25 billion worth of planes to Iran Air. According to initial reports, Boeing planned to sell approximately 80 commercial airliners to Iran Air and secure the sale of another 29 planes to a third party, which would then lease the aircraft to Tehran.

The company’s deal marked the first time since the Islamic Revolution in 1979 that American aircraft were sold to Tehran.

The Obama administration previously sanctioned Iran Air after the airline used passenger and cargo planes to fly rockets and missiles to Syria and other nations. The weapons were sometimes disguised as medicine or spare parts, according to past reports.

Under the Iran nuclear deal, the Obama administration dropped economic sanctions against Tehran.

“We now have American companies who are saying, ‘You know what? Let’s do business with a terrorist regime. How’s that? Let’s just go make a buck,’” Roskam said of Boeing during his floor speech Thursday. “That’s the scandal of this. The scandal is there are American companies, international companies, Boeing, Airbus, that are now making their own names linked with terror forevermore.”

In addition to Boeing, Airbus also signed an agreement with Iran to sell the regime aircraft.

Though Boeing didn’t previously disclose whether it would seek Ex-Im financing to help fund the sale of the jets to the third party, lawmakers worried the company would attempt to secure taxpayer-backed loans and loans guarantees for the transaction.

Ex-Im, however, can’t currently approve transactions of more than $10 million because of vacant seats on its board of directors.

The five-member panel currently lacks a quorum of three members, and all transactions topping $10 million, which primarily benefit Ex-Im’s biggest beneficiaries like Boeing, have been stalled.