Return of Earmarks Would Boost the Ruling Class 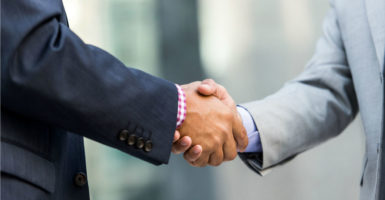 In the years since the Republican ban on congressional earmarks took hold, the number of clients lobbying on budget and appropriations issues decreased by nearly 50 percent. (Photo: iStock Photos)

Banning congressional earmarks was one of the signature accomplishments of House Republicans over the last several years. It ended years of backroom promises, handshake money exchanges, and hundreds of millions of wasted taxpayer dollars.

Unfortunately, a quiet effort is now underway by some House Republicans to erode that ban. Without strong opposition from constituents and principled leadership from current Republican leadership, we could very well be heading back to the time when bridges to nowhere and rainforests in Iowa were routine.

Conservatives oppose earmarks because those dollars served as the lubricant that empowered politicians to cut bad deals. In turn, those massive big-spending boondoggles empowered lobbyists and faceless congressional committee staffers, and ultimately led to corruption.

In 2010, before Republicans recaptured the House, Rep. Jeb Hensarling, R-Texas, told The Washington Post that his opposition to earmarks and his crusade to end them “made me more popular.” He continued:

Before the full force of the tea party was on display and long before the Donald Trump voter stunned the nation’s ruling class, Hensarling had hit on a key responsibility of lawmakers in Washington.

Indeed, the 2010 Republican-led earmark ban was a serious and consequential first step to addressing the very real notion that Washington worked well for the well-connected but not for the disaffected and displaced.

In the years since the Republican ban on congressional earmarks took hold, the number of clients—companies, associations, etc.—lobbying on budget and appropriations issues decreased by nearly 50 percent.

Unfortunately, the earmark ban was viewed as a final and victorious end, as opposed to merely a first step in ending the cronyism and corruption in Washington. Many were content to simply adapt and find new ways to continue the status quo.

There is no doubt that the earmark ban forced lawmakers to vote on the actual policies contained in bills placed on the floor by party leaders, and that is good for our system of government. However, the failure to do more allowed corporate welfare to continue, punitive regulatory barriers to expand, and the ruling class to thrive.

If we are to learn the lessons from this election season—on both the right and the left—we must do more to reverse this trend, not less. And a covert effort by a handful of House Republicans to bring back earmarks would amount to a rebuke of the American people.

Every single person in this country deserves an honest, transparent government that is working for everyone, not simply doling out favors to a well-connected few.