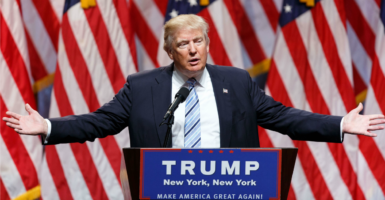 The wall that Donald Trump wants to build along the southern border? It won’t be immediately possible if this current Congress passes an omnibus spending bill in December. (Photo: Chine Nouvelle/SIPA/Newscom)

Congress returns this week for its lame-duck session—that period of time between November and the end of the year where accountability in Washington is at its lowest.

Voters aren’t really paying attention now that the main event—the election—is over, and retiring and newly defeated members are no longer held accountable for the votes they’re about to cast.

In short, this is prime time for the backroom deals, tax increases, bloated spending bills, and general arm-twisting that have given Washington such a bad name.

>>> Memo From Conservative Leaders: Congress Should Not Hold a Lame-Duck Session

This time around, members of Congress will face pressure to “clear the decks” for the new president—code words for throwing everything but the kitchen sink into a giant bill and passing it as fast as possible on their way out the door, hopefully while no one is looking.

This is particularly true when it comes to spending bills. The lame-duck Congress must pass a funding bill by Dec. 9. House Speaker Paul Ryan and Senate Majority Leader Mitch McConnell have previously discussed passing an omnibus spending bill—that is, a thousand-page package containing all 12 appropriations bills—to fund the government for the entire year.

Now that Donald Trump is the president-elect, such a move would be a mistake.

Come January, the Republicans will have unified control of the presidency, the House of Representatives, and the Senate. Passing a funding bill that expires well into the new term of the president-elect would bind the new Congress, and limit the legislative options of the new president.

As conservatives have pointed out—most recently in a memo by the Conservative Action Project—any spending bill longer than two months will significantly diminish the ability of Republicans to impose their legislative agenda in the new year.

Furthermore, passing an omnibus spending bill would be inherently undemocratic. On Nov. 8, the voters expressed their will and elected a new president, and a new Congress. For this current, lame-duck Congress to pass a spending bill that will restrict the ability of these newly elected representatives—including the new president—from implementing their priorities is an affront to the very principles on which electoral government stands.

Put another way, a deck-clearing, omnibus spending bill will effectively hamstring Trump from implementing key portions of his 100-day agenda.

The wall that Trump wants to build along the southern border? It won’t be immediately possible if this current Congress passes an omnibus spending bill in December. The repeal and replacement of Obamacare would likely be delayed as well.

The mandate the voters laid out is very clear, and this current Congress would do well to heed it. Ryan and McConnell should not waste their time negotiating with a departing president at the expense of the president-elect’s ability to do what the voters elected him to do.