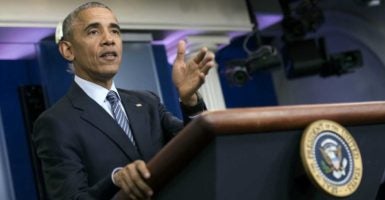 President Barack Obama takes questions from the media at his first press conference since Donald Trump won the 2016 presidential election. He talked about the need for a smooth transition and expressed hoped that Trump would keep some of his signature issues. (Photo: Kevin Dietsch/UPI/Newscom)

President Barack Obama predicted Monday that his successor might keep some of his major legacy items such as the Iran nuclear deal, the Paris climate agreement, and potentially even Obamacare, stating that President-elect Donald Trump isn’t ideological.

Trump will find that “reality will assert itself,” Obama said during his first post-election press conference.

“On a lot of issues, what you’re going to see is that now comes governing, now is the hard part,” Obama said.

The president had mostly cordial words for Trump, a Republican, whom he had a war of words with during the presidential campaign as he stumped for Democratic presidential nominee Hillary Clinton.

“I don’t think he is ideological and ultimately he is pragmatic,” @POTUS says.

“He is coming to this office with fewer set hard and fast policy prescriptions than a lot of other presidents,” Obama said. “I don’t think he is ideological and ultimately he is pragmatic. That can serve him well as long as he’s got good people around him and he’s got a good sense of direction.”

Obama asserted this a day after a Trump interview on CBS’s “60 Minutes” aired, where the incoming president said he wanted to maintain some provisions of the Affordable Care Act, such as requiring coverage for pre-existing conditions and allowing people to remain on their parents’ health insurance up to age 26.

“This has been the holy grail for Republicans for the last six or seven years, we’ve got to kill Obamacare,” Obama said, later adding, “It’s one thing to characterize this as not working when it’s just an abstraction. Suddenly you’re in charge and you’re going to repeal it, well, what happens to those 20 million people that have health insurance?”

Obama also urged Trump not to reverse his 2012 Deferred Action for Childhood Arrivals, an executive action that shields the children of illegal immigrants from deportation.

“Do I think the new administration will make some changes? Absolutely,” Obama said. “But these international agreements, the tradition has been that you carry them forward across administrations, particularly if after you examine them, you find out they are doing good for us.”

The main argument against it was that Iran wouldn’t abide by the deal, that they would cheat. We now have over a year of evidence that they have abided by the agreement. That’s not just my opinion. That’s not just people in the administration. That’s the opinion of Israeli military intelligence officers who were part of a government that vehemently opposed the deal. So my suspicion is that when the president-elect comes in and meets with his Republican colleagues on the Hill, that they will look at the facts, because to unravel a deal that is working and preventing Iran from pursuing a nuclear weapon would be hard to explain.

Obama noted both the Iran nuclear agreement and the Paris climate agreement were multilateral deals, which will make it more difficult for the United States to withdraw unilaterally.

“Now, you’ve got 200 countries that have signed up for this thing,” Obama said. “The good news is, what we’ve been able to show over the last five, six, eight years is that it’s possible to grow the economy and possible to bring down carbon emissions as well.”