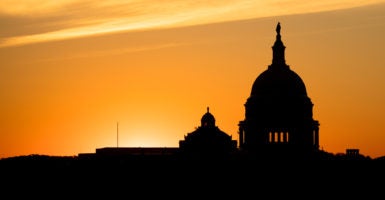 A trio of Republican lawmakers wants to return to the practice of earmarking, which became synonymous with government waste and pork-barrel spending during the GOP-controlled Congress of the early 2000s. (Photo: Jeff Malet/Newscom)

One week after Donald Trump won the presidency on a promise to “drain the swamp” in Washington, House Republicans will vote on a proposal to bring back earmarks.

The vote will take place Wednesday when House Republicans meet to adopt their rules for the next Congress. The House earmark ban dates to 2010 when the GOP won control of the chamber.

Now, a trio of Republican lawmakers wants to return to the practice of earmarking, which became synonymous with government waste and pork-barrel spending during the GOP-controlled Congress of the early 2000s.

Reps. John Culberson of Texas, Mike Rogers of Alabama, and Tom Rooney of Florida are listed as sponsors of the amendment, a copy of which was obtained by The Daily Signal.

If the amendment is adopted by a secret-ballot vote Wednesday, lawmakers would be able to request earmarks once again as long as the sponsoring member is identified, the earmarks initiate in committee, and they don’t increase spending. A group of conservative bloggers launched an effort called Porkbusters to expose the abuse and call for reform. By the time Republicans lost control of Congress in 2006, several Republican lawmakers were calling for earmarking to end. They included then-Sens. Tom Coburn of Oklahoma and Jim DeMint of South Carolina. (DeMint is currently president of The Heritage Foundation.)

Sen. John McCain, R-Ariz., made it a staple of his 2008 presidential campaign, and in 2010, then-GOP Leader John Boehner, a longtime earmark opponent, oversaw its adoption in the House. Senate Republicans, although not in the majority at the time, adopted a voluntary ban in 2010 as well.

“This earmark ban shows the American people we are listening and we are dead serious about ending business as usual in Washington,” Boehner said in November 2010.

Conservatives quickly seized on the news Monday to denounce the amendment to bring back earmarks.

The Daily Signal contacted Culberson, Rogers, and Rooney for comment Monday. Their offices did not respond.

The senior House aide predicted Wednesday’s vote would be close given the secret ballot and the desire of some members to return to the practice of earmarking.

“The last thing Republicans should do is change conference rules to facilitate this horse-trading,” the aide told The Daily Signal. “Hillary Clinton got in trouble for her pay-to-play behavior, and the American people should rightfully be concerned about how members of Congress can get trapped in corruption of earmarks.”

Heritage Action’s Needham suggested the return of earmarks sends the wrong message to voters a week after Trump’s historic victory.

“Americans in both parties are fed up with the cronyism and corruption in Washington, and seven days ago they delivered a stunning message to the nation’s ruling class,” he said.

“Any member of Congress who votes to bring back old-school, backroom, pork-barrel spending through earmarks is putting himself or herself firmly against the American people who just elected Donald Trump president, as he campaigned emphatically on the issue of draining the swamp in Washington,” Martin said.

“Did they learn nothing at all from these elections? People are tired of business as usual in D.C.,” she added. “This is not a show of good faith, it’s a show of callous cynicism and hypocrisy.”

This story was updated to include quotes from the Club for Growth and Tea Party Patriots.