Elon Musk, chairman of SolarCity and CEO of Tesla Motors, speaks Oct. 2, 2015, at SolarCity's Inside Energy Summit in New York. Among SolarCity, Tesla, and SpaceX, Elon Musk’s interests got at least $4.9 billion in taxpayer subsidies over the past 10 years. (Photo: Rashid Umar Abbasi/Reuters/Newscom) 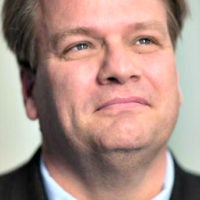 David Williams is president of Taxpayers Protection Alliance, a Washington-based nonprofit and nonpartisan organization that researches, and educates the public about, the government’s effects on the economy.

From Enron to Bernie Madoff, at the end of every great American financial scandal, the totality of the perpetrators’ greed seems to be matched only by the public’s incredulity at how such a thing could be allowed to happen.

And thanks to Elon Musk, there’s a good chance we may all be asking this question again soon.

The Senate Finance Committee and the House Ways and Means Committee have launched a probe into tax incentives paid to solar companies, according to The Wall Street Journal. The committee probes, led by their respective Republican chairmen, Rep. Kevin Brady of Texas and Sen. Orrin Hatch of Utah, have found an appropriate and disturbing target to begin this work.

SolarCity, a solar installation company set to be purchased by Tesla Motors Inc., is one of the seven companies named in the initial investigation.

Already grossly subsidized, Musk’s SolarCity has become an albatross of waste, fraud, and abuse of tax payer dollars. As legitimate earnings and cash become even scarcer for SolarCity, its entanglement in the Tesla empire suggests that a drastic reckoning not only is imminent, but in fact emboldening Musk to become more outlandish and reckless.

Notably, SolarCity is run by Musk’s cousins, Lyndon and Peter Rive. During his chairmanship at SolarCity, Musk’s family enterprise has taken in billions of taxpayer dollars in subsidies from both the federal and local governments. But the subsidies and sweetheart deals were not enough, as losses and missed projections continued to mount.

Ultimately, rather than endure the embarrassment of collapse and further damage to the public image of Musk and Tesla, the cousins conspired to have Tesla simply purchase SolarCity this year. The conditions of the deal screamed foul play.

To say nothing of what sense it might make for an automaker to purchase a solar installation company, Tesla stockholders were being forced to absorb a failing, cash-burning company and pay top dollar to do so.

While cost cutting and corporate restructuring should have been the priority for a company swimming in debt and burning through available cash, SolarCity in fact has been doubling down on the failed model of taxpayer support. The desperate thirst for handouts has manifested itself in some of the murkiest political waters imaginable.

Thanks to Musk’s cozy relationship with New York Gov. Andrew Cuomo, a Democrat, the state has granted at least $750 million of its taxpayers’ money to SolarCity, building the company a factory and charging it only $1 per year in rent.

It would be hard to imagine such an operation would not be lucrative for its shareholders. And yet somehow, SolarCity never has made a profit.

It’s not just in New York. In this year’s race for Arizona Corporation Commission, the state’s public utilities overseers, only one outside group funneled cash into the contest.

All of the $3 million donated by that group, Energy Choice for America, came from SolarCity. The beneficiaries are candidates who have signaled their willingness to be part of the “green machine” that greases the skids for lucrative government subsidies.

Burning through taxpayer dollars, buying elections, and expanding a network of crony capitalism has become so inherent to the SolarCity model that $3 million to a public commissioner’s race, brazen though it may be, is only a drop in the bucket for Musk and SolarCity.

In 2013 alone, SolarCity received $127.4 million in federal grants. The following year, in which it received only $342,000 from the same stimulus package, total revenue was just $176 million and the company posted a net loss of $375 million.

Despite an expansion of operations and claims to be the leader in the industry, SolarCity never has been able to survive without serious help from government subsidies and grants. The failure to responsibly turn taxpayer dollars into a profitable renewable energy provider has led to SolarCity’s collapse into the welcoming arms of Tesla.

And with Tesla, SolarCity in fact will be right at home, compounding a disastrous shell game that Elon Musk is playing with government resources.

It has been widely reported that among SolarCity, Tesla, and the rocket company SpaceX, Elon Musk’s confederacy of interests has gotten at least $4.9 billion in taxpayer support over the past 10 years.

This is almost half of Musk’s supposed net worth—taken from the pockets of American citizens and put into companies that can survive only by cannibalizing each other, spending without end, and promising that success is always just beyond the horizon and yet never arrives.

The American people are being taken on a ride by SolarCity, Tesla, and Musk. The ride is fueled by a cult of personality in Musk. And it costs billions of taxpayer dollars as he promises us not only the moon, but to harness the power of the sun and send us all to Mars.

In the cases of Enron and Bernie Madoff, in the end the cheated victims wished to have woken up sooner to the hubris that enabled such a downfall—or that at least regulators had pulled their heads out of the sand before the full impact of the collapse was realized.

We’ve seen this story before and we know how it ends.

The congressional investigations underway not only are necessary but a signal that more must be done, and soon. We may not be able to help Elon Musk stop himself from failing again, but we certainly shouldn’t be the ones to pay for it.

It’s past time for the American people to stand up to Musk and demand that our legislators and other elected officials bring him back to earth before spending one more dollar of our money. He’s wasted enough of it already.