How Trump Closed the Deal With Evangelicals 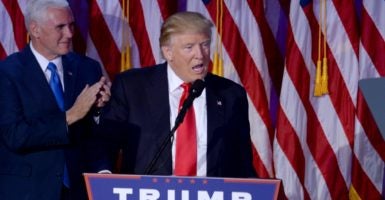 “Weeping may endure for the night, but joy comes in the morning.”

Those words from the Psalmist, King David, rang especially true for many Americans on Nov. 9 when they awoke to the news that the nation had rejected the continuation of the anti-family, anti-faith policies of President Barack Obama by electing Donald Trump in perhaps the most stunning political upset of the modern age.

In a year of surprises, the ultimate outsider delivered the biggest, tapping into the frustration that pollsters didn’t detect and liberal elites never took seriously.

“The forgotten men and women of our country will be forgotten no longer,” vowed the president-elect, who not only overcame the opposition of the Democratic Party, but his own—soaring to victory in spite of a biased media, his own personal baggage, lopsided polls, and a bevy of Hollywood stars.

In disbelief, pundits watched as the electoral map turned a sea of red, colored by almost a decade of disillusionment with the president’s extremist agenda. Voters delivered a stinging repudiation—not just of Hillary Clinton—but her party’s ultra-liberal agenda and arguably the entire Obama era.

But the night wasn’t just a vindication of Trump. It was also a validation once again of the evangelical movement, which once again overcame the media’s narrative of division to deliver one of the most significant political messages this country has ever seen. In nearly every election cycle for the last 40 years, the left has tried to bury a movement it wishes had never been born. And on the night of Nov. 8, it learned just how impossible that prospect will be.

Evangelicals, many of whom (myself included) backed other candidates during the primary, quietly assessed the perilous state of the nation and unified behind Trump in greater number than they had behind the last three GOP nominees. To the astonishment of everyone, Trump outperformed John McCain, Mitt Romney, and even George W. Bush—winning an overwhelming 81 percent of the evangelical vote.

If the media had questions about the influence of the religious right, they were answered early Wednesday morning by the greatest coalescence around a Republican nominee in two decades. It turns out the press had about as much success writing the obituary of the evangelical movement as it had predicting this election.

Anyone who traveled the country these last few months saw how values voters were drawn to Trump, not because of shared values, but because of shared concerns over the damage a Clinton Supreme Court would do to our freedoms. Recognizing that national security hung in the balance, they saw this as an opportunity, after eight years of Obama’s repressive policies, to make freedom mean something again.

They also had the opportunity to hear, along with the rest of America, one of the best arguments against partial-birth abortion the country has ever heard in a presidential debate, in which Trump described—in detail—the barbaric procedure that rips a child out of the womb moments before birth. It may have been the most significant moment—not just of Trump’s campaign, but in the history of modern presidential politics.

In four short sentences, the GOP nominee closed the deal with millions of pro-life voters, solidifying their support as the best chance to end America’s nearly 44 years of court-imposed abortion on demand.

According to pollster George Barna, politically engaged evangelicals rank abortion as their top issue (30 percent) and Supreme Court nominations a close second (28 percent). The final debate delivered exactly the clarity they were hoping for.

In the end, though, what we witnessed wasn’t just the revenge of the deplorables, but the collapse of the Obama legacy. After the spectacular failures of Obamacare, the demoralization of our military, the explosion of lawlessness, tolerance of corruption, and obsession with social engineering, Americans finally have the opportunity to rebuild the country they once knew.

But the election is just the starting gun. Trump may open the door to America’s solutions, but he was never meant to be the solution.

The true transformation of a society starts in the hearts and minds of men and women. And under an administration with no interest in continuing the eight-year war on the First Amendment, we may finally see what the church is capable of.

In the meantime, one thing about this historic uprising is clear: Americans are looking for leaders of conviction. And as the results of the race for president show, they will accept no substitutes.