How Republicans Could Overcome Filibusters by Senate Democrats 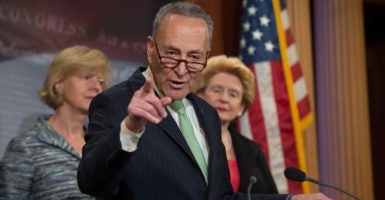 To overcome a filibuster from Senate Democrats, Republicans could invoke the two-speech rule, a seldom-used Senate rule that allows bills to pass with a simple majority. (Photo: Perisha Gates/ZUMA Press/Newscom)

As Democrats strategize on how to stop conservative legislation from making its way to Donald Trump’s desk in the White House, Republicans have a little-known rule in their toolbox that would allow them to pass legislation, including a repeal of Obamacare, with a simple majority.

Democrats were able to keep 48 seats in the Senate after Tuesday’s election, giving the party the power to filibuster legislation and effectively prevent conservative policies from being enacted.

But Republicans can turn to a seldom-used Senate rule that would allow them to pass legislation by a simple majority vote—legislation that has a greater chance of earning Trump’s signature after he assumes office Jan. 20.

Called the two-speech rule, the tool limits senators to giving only two speeches in one legislative day on a question before the Senate. A legislative day, which differs from a calendar day, ends when the upper chamber adjourns.

Once a senator gives those two speeches, he or she is not allowed to speak again.

The Senate then would vote on the bill up for debate when there aren’t any more senators who are permitted to speak.

Senators don’t often use the two-speech rule, a December 2014 report from the Congressional Research Service states. However, the report acknowledged that senators may choose to invoke the rule “as a means of attempting to overcome a filibuster.”

Republican senators explored using the two-speech rule earlier this year, when both the House and the Senate were focused on passing 12 individual appropriations bills to fund the government for 2017.

A memo early this year from a Republican Senate aide, James Wallner, urged conservative senators to enforce the two-speech rule to avoid filibusters by Democratic colleagues.

At the time, Wallner was executive director of the Senate Steering Committee, the upper chamber’s conservative caucus. Wallner currently is group vice president for research at The Heritage Foundation.

The strategy should increase the costs (both physical and political) on individual Democrats for obstructing the Senate’s appropriations work. Doing so forces them to bear the burden of blocking consideration of specific appropriations bills. It also makes the minority’s obstruction tangible to the American people, thereby increasing the public’s awareness of Democrats’ efforts.

Senate Republicans need to secure 60 votes to advance legislation, but will fall short of that threshold in the 115th Congress, when they will hold 52 seats.

But invoking the two-speech rule would circumvent the chance for a filibuster, as senators instead would voice their opposition or support rather than vote on whether to advance legislation.

Although the Wallner memo focused on how to move appropriations bills forward, the two-speech rule could be applied to future legislation addressing Obamacare—Republican leaders have said they are committed to repealing the health care law—as well as to Supreme Court nominations.

Since Justice Antonin Scalia died in February, one seat has remained vacant on the high court. President Barack Obama nominated Merrick Garland, a D.C. appeals court judge, but Senate Republicans refused to move the nomination and chose instead to wait for a new president to be sworn in.

Since Republicans took control of the Senate in 2014, GOP lawmakers have been stymied in their ability to pass legislation that has any Democratic opposition.

Instead, Democrats have withheld votes on motions to proceed—which advance legislation for final passage—in an effort to “extract concessions” from Republican leaders, the Wallner memo stated.

Democrats’ efforts have been especially noticeable during spending fights in recent years. In response to filibusters from the minority party, Republicans frequently have removed GOP-favored policy riders attached to legislation or raised spending levels once they return to the negotiating table, action that has angered conservative members.