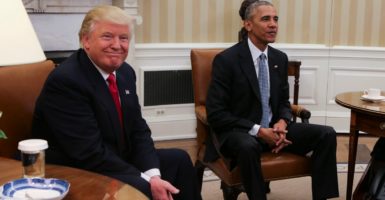 President-elect Donald Trump should use the first 100 days of his administration to repeal every illegal executive action the Obama administration has issued. (Photo: Aude Guerrucci/Polaris/Newscom)

Brad Bishop is a senior media associate at The Heritage Foundation.

However, throughout the last eight years, we have seen the Obama administration continually abuse the power of the executive branch by issuing unconstitutional, unilateral executive actions to push its agenda. The “old days” of Congress creating our laws have become a distant memory.

President Barack Obama even went so far as to announce his unilateralism, saying, “We’re not just going to be waiting for legislation in order to make sure that we’re providing Americans the kind of help they need. I’ve got a pen and I’ve got a phone.”

Well, it appears that American voters have their own pens, too, and they’ve put them to their ballots now in a stunning and decisive way. On Tuesday, the American people elected Republican outsider Donald J. Trump to serve as the 45th president of the United States.

Now, with control of the presidency, both chambers of Congress, and soon the Supreme Court, conservatives across the country are looking forward to repairing some of the damage Obama has inflicted on our constitutional system.

As long promised, Trump should use the first 100 days of his administration to repeal every illegal executive action the Obama administration has issued while in office.

Here is a list of the seven areas with the most damaging executive actions signed during the Obama administration that must be repealed:

By making the repeal of these executive actions a priority, the Trump administration will have an easy opportunity to right some of the wrongs of the past administration.

As Henry Ford once said, “Failure is simply the opportunity to begin again, this time more intelligently.” It’s been a while since conservatives have had an opportunity like this one, and it is imperative we take advantage of it.