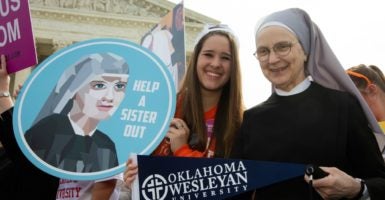 Donald Trump should commit to protecting the free exercise of religion for all Americans of all faiths. (Photo: Jeff Malet Photography/Newscom)

Donald Trump promised that he would make America great again. If he is to make good on that promise, he’ll need to start by robustly restoring our first freedom: the free exercise of religion.

Unfortunately, under President Barack Obama’s administration, it came in for attack as never before. Thankfully, many of those attacks can be rectified in the very first days of a Trump administration.

Trump should commit to protecting the free exercise of religion for all Americans of all faiths. In her concession speech, Hillary Clinton referred to the “freedom of worship”—piety limited to a synagogue, church, or mosque. But what the American founders protected was the right of all to live out their faith every day of the week in public and in private, provided they peacefully respect the rights of others.

>>>>For more on this, see Ryan T. Anderson’s “Truth Overruled: The Future of Marriage and Religious Freedom”

The reduction of religious liberty to mere freedom of worship is a hallmark of the Obama years. Houses of worship, for example, were exempted from the Department of Health and Human Services Obamacare contraception and abortifacient mandate.

But religious schools, like Wheaton College, and religious charities and communities, such as the Little Sisters of the Poor, were merely “accommodated”—offered a different way to comply with the mandate while still violating their beliefs.

A Trump administration can fix this right away. Trump can instruct his secretary of Health and Human Services to provide robust religious liberty protections to the HHS mandate. And Congress can pass legislation, which Trump can sign, to repeal and replace Obamacare.

Likewise, the Obama administration has engaged in a series of executive actions—some of which were likely unlawful—to advance a radical transgender agenda. This, too, Trump can end.

For example, the Obama departments of Justice and Education have instructed school districts throughout the country that they are now interpreting a 1972 law, Title IX, to require schools to allow students to use the bathroom, locker room, and shower facility that accords with their self-declared “gender identity.” They did this by saying the word “sex” would now mean “gender identity.”

The Obama Department of Health and Human Services has done the same thing: claiming a provision in Obamacare that forbids discrimination on the basis of “sex” means “gender identity”—and thus all health care plans have to cover sex reassignment therapies, and all relevant physicians have to perform them.

Obama has also issued executive orders barring federal contractors and federal foreign aid recipients from engaging in what the government deems to be “discrimination” on the basis of “sexual orientation and gender identity”—where something as simple as saying biological males shouldn’t use female showers can count as “discrimination.”

All of this can be undone right away. Trump can rescind Obama’s executive orders, and he can instruct his secretaries of Education and Health and Human Services and his attorney general to interpret the word “sex” as Congress intended it—as a biological reality—not as “gender identity.”

Congress can then make these orders permanent by enacting the Russell Amendment, which protects freedom in religious staffing for religious institutions, and by passing the Civil Rights Uniformity Act, which specifies that the word “sex” in our civil rights laws does not mean “gender identity” unless Congress explicitly says so.

Trump should also make it clear that under his watch the federal government will never penalize any individual or institution because they believe and act on the belief that marriage is the union of husband and wife.

Trump can issue an executive order stating that when it comes to tax status, accreditation, licensing, government grants, and contracts, no entity of the federal government may penalize someone for acting on their conviction on man-woman marriage. To protect a future president from undoing this, Congress can pass, and Trump sign into law, the First Amendment Defense Act. Indeed, Trump promised to sign this bill into law during his campaign.

Whether it be harassing an order of nuns, forcing doctors to perform sex reassignment therapies, or preventing local schools from finding win-win compromise solutions that would respect all students’ bodily privacy, the Obama administration has waged an aggressive and unnecessary culture war.

Because it has done so almost exclusively through executive action, a Trump administration can quickly undo this damage. And Congress can then ratify it permanently in law. That’ll go a long way toward protecting peaceful coexistence, making American truly great again.