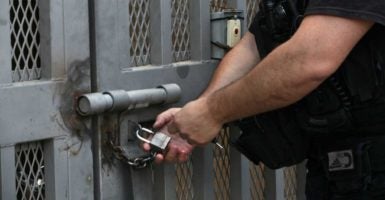 A majority of Americans, including 51 percent of Hispanics, believe that the government has not enforced immigration laws enough, according to a poll conducted by Pulse Opinion Research.

“[Donald] Trump’s emphasis on enforcement clearly resonates with Americans, even if he has sometimes been careless in discussing the issue,” wrote the Center for Immigration Studies’ Steven Camarota.

According to the poll, a plurality of Democrats (34 percent) believe there is too little effort put into enforcement, while majorities of Republicans (76 percent) and voters not affiliated with either major party (56 percent) said the same.

When asked how many legal immigrants should be admitted to the country each year, a majority of Americans (54 percent), including 52 percent of Hispanics, said it ought to be half a million or fewer.

The poll also showed that 49 percent of Hispanics would support “a policy that causes illegal immigrants to return to their home countries by penalizing employers who hire them, getting cooperation from local law enforcement, and denying them welfare benefits,” while 36 percent would not support such a policy.

Hispanics, however, were split roughly evenly on whether the U.S. should focus first on requiring employers to verify the legal status of their employees (48 percent) or granting employees who immigrated to the United States illegally work permits (50 percent).

“This is one of the few studies I’ve seen that takes a more piecemeal approach, rather than just testing amnesty versus deportation,” said Elizabeth Fender, a market research associate at The Heritage Foundation. “Some of their results are confirmed by other polls. For instance, Gallup consistently finds that twice as many want to decrease immigration as increase it.”

The survey was conducted nationally Nov. 1-3 from a pool of 1,000 likely voters. The margin of error is plus or minus 3 percentage points with a 95 percent level of confidence.