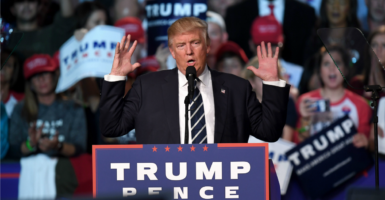 Liberals’ outrageous remarks that Donald Trump voters were motivated by racism do a grave disservice to the integrity of the millions of Americans who voted for Trump. (Photo: Aftonbladet /Zuma Press/Newscom)

Already, liberals are trying to push the narrative that Donald Trump’s win was propelled by racist Americans.

But the facts show otherwise.

“Trump performed stronger among black and Hispanic voters than Mitt Romney did as the Republican nominee in 2012, according to NBC exit polls,” NBC News reported.

“On average, the counties that voted for Obama twice and then flipped to support Trump were 81 percent white,” reported The Washington Post, making it almost certain some of Trump’s white voters were people who had voted for President Barack Obama—not exactly the hallmark trait of a racist.

As a New York Magazine headline put it: “Trump Won a Lot of White Working-Class Voters Who Backed Obama.”

And liberals’ outrageous remarks that Trump voters were motivated by racism do a grave disservice to the integrity of the millions of Americans who voted for Trump. (Although Trump would do well to make clear he rejects racist supporters.)

Looking at the exit polls posted by CNN, there are many policy reasons why 59 million Americans voted for Trump, including:

These are issues of national security, rule of law, and the scope of government. Throughout his tenure, Obama has aggressively worked to promote a liberal agenda, from Obamacare to the Iran nuclear deal.

He has used his executive power to grant amnesty, to push gun control, and to force schools to require high school girls’ locker rooms to allow biological males who identify as women to enter. He has signed spending bills that have pushed the nation deeper and deeper into fiscal irresponsibility, and under his leadership, our national debt has close to doubled.

We increasingly have seen laws being made, not by the lawmakers we elect, but by unelected bureaucrats in the executive branch. We have seen the Supreme Court uphold illegal provisions of Obamacare, and overrule the votes of millions of Americans on the legalization of same-sex marriage.

And a Hillary Clinton presidency seemed a certain continuation of that course. Asked about Supreme Court nominations in the Oct. 19 debate, Clinton didn’t bring up appointing justices who adhered to the Constitution.

Clinton’s own actions during her tenure at the State Department—including her disregard of how to handle classified material with care—suggested she saw herself as above the law, not bound by it. That’s hardly an attitude that would suggest she would refrain from abuse of executive power.

And Clinton ran to the left, embracing free college for children in families with household incomes of $125,000 or less. She backed hiking the minimum wage to $15 an hour—careless of how that could impact businesses or young adults looking to secure that first job while they still had few skills to make them attractive to employers. Due to WikiLeaks, it was revealed Clinton had said in a 2013 speech: “My dream is a hemispheric common market, with open trade and open borders.”

And Clinton was open about her disdain for religious liberty, saying in a 2015 speech: “America moves forward when all women are guaranteed the right to make their own health care choices, not when those choices are taken away by an employer like Hobby Lobby.” (Hobby Lobby, which is owned by a religious family, only wanted not to offer abortion-inducing drugs to its employees—a case it had to fight all the way to the Supreme Court.)

She was unwilling to compromise on abortion. As Trump put it bluntly in the last debate, “If you go with what Hillary is saying, in the ninth month, you can take the baby and rip the baby out of the womb of the mother just prior to the birth of the baby.”

So, no, this isn’t about Americans being racist.

It’s about Americans wanting their government officials to have to follow the rule of law, and to have the law made by the politicians they elect, not the Supreme Court or bureaucrats.

It’s about rejecting liberal policies, and choosing the conservative vision for our country—a vision that pushes prosperity and freedom. It’s about having enough human decency to say that a child in the womb deserves the right to life. It’s about wanting to keep our country safe, and to be able to keep an America where all men and women can live in accordance with their beliefs.

Liberals can scream all they want about this being “racism” (when they’re not whining about the decline of civility in this country). But if they are serious about wanting to bring the country together, maybe they could start by realizing the lesson from election night was that millions of Americans cherish values and policies that Obama, Clinton, and many others on the left have aggressively attacked and tried to destroy. They may not agree with those values—but it’s time they realize people who hold those values exist.

As Trump put it in his speech in the early hours of Wednesday morning, “The forgotten men and women of our country will be forgotten no longer.”

It’s time the left wakes up to that reality.