On Election Day, ‘We the People’ Tell the Government What to Do 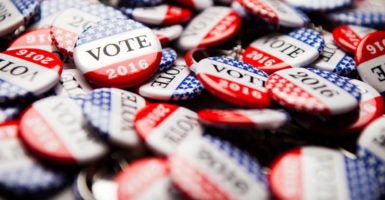 Ronald Reagan once said "'We the People' tell the government what to do; it doesn't tell us." (Credit: iStock Photos)

In urging the delegates to a New York convention to ratify the U.S. Constitution in 1788, Alexander Hamilton emphasized the principal strength of the new Constitution: “Here, sir, the people govern.”

The federal government gets its mandate from the American people. You are in charge. Express your will: vote.

You help govern your country through the exercise of your right to vote. As the U.S. Supreme Court has said: “No right is more precious in a free country than that of having a voice in the election of those who make the laws under which, as good citizens, we must live.”

When he first became president in 1885, Grover Cleveland stressed in his inaugural address the public trust held by every voter:

He who takes the oath today to preserve, protect, and defend the Constitution of the United States only assumes the solemn obligation which every patriotic citizen—on the farm, in the workshop, in the busy marts of trade, and everywhere—should share with him. The Constitution which prescribes his oath, my countrymen, is yours; the government you have chosen him to administer for a time is yours; the suffrage which executes the will of freemen is yours; the laws and the entire scheme of our civil rule, from the town meeting to the state capitals and the national capital, is yours. Your every voter, as surely as your chief magistrate, under the same high sanction, though in a different sphere, exercises a public trust.

Ours was the first revolution in the history of mankind that truly reversed the course of government, and with three little words: ‘We the People.’ ‘We the People’ tell the government what to do; it doesn’t tell us.

Conservatives will do tomorrow and the next day exactly what we did yesterday and the day before: We will continue to formulate and promote conservative public policies based on the principles of free enterprise, limited government, individual freedom, traditional American values, and a strong national defense.

God bless the United States of America and its people. Now, go vote.

This commentary was originally published on Election Day in 2012, but it’s message is timeless.