Who Pays for Politicking on Air Force One? Here’s the Formula for How Costs Are Split 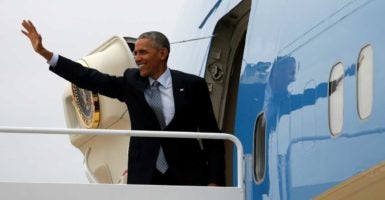 President Barack Obama hit the skies in Air Force One in the week before the presidential election, stumping for who he hopes to be his successor—at a cost that will mostly be covered by taxpayers, but will be partially refunded by the campaign.

Air Force One, for fiscal year 2016, has an estimated cost per flying hour of $180,118, according to the U.S. Air Force information obtained by Judicial Watch.

The reimbursement is based on what a flight would cost if it were a first-class commercial airline, according to Federal Election Commission regulations.

“I would anticipate that the president will spend a significant amount of time traveling next week,” @PressSec said.

The Reagan administration established written standards in 1982 about political travel on Air Force One. The guidelines determined when the president and vice president would travel entirely at government expense and when political campaigns or committees would have to reimburse the government for these costs.

Subsequent opinions by the Justice Department and Office of Legal Counsel and the Federal Election Commission backed up the Reagan administration policy, extending to the first lady and vice president’s spouse, according to a 2012 report by the Congressional Research Service.

The Federal Election Commission guidelines require that the cost of Air Force One travel be offset by “the lowest unrestricted and non-discounted, first-class airfare in the case of travel between cities served by regularly scheduled first-class commercial airline service,” or the “the normal and usual charter fare or rental charge for a comparable commercial aircraft of sufficient size to accommodate all campaign travelers and security personnel, if applicable, in the case of travel to or from a city not regularly served by regularly scheduled commercial airline service.”

“I would anticipate that the president will spend a significant amount of time traveling next week in support of not just Secretary Clinton’s presidential campaign, but Democrats further down the ballot,” Earnest said.

“The president’s view is that the stakes in the election are high, not just in terms of determining who will occupy the Oval Office for the next four years, but how much success President Obama’s successor will have in advancing their agenda through the Congress, so that would account for the president’s passion.”

Previous presidents of both parties have typically taken the presidential plane on the campaign trail both for their desired White House successor and for candidates running for office in congressional and gubernatorial campaigns. Usually, the party out of power raises questions about how tax dollars are funding partisan politics.

To fly first class in the cities Obama visited in the final week of the campaign, it would cost $5,396.82 per person, based on Expedia numbers. That would seem hefty, but the total Air Force One cost for travel would be about $1.08 million. This would be just under six flight hours, according to the website Flightmanager.com.

“The average cost to fly on commercial is far less than the taxpayers are covering, it’s just a small portion,” Demian Brady, director of research at the National Taxpayers Union Foundation, told The Daily Signal. “There are also a lot of undisclosed costs. We need a fairer system for compensation as well as greater transparency.”

Campaign flights earlier in the year were shorter. In September and October, Obama traveled to Charlotte, Philadelphia, Cleveland, and Orlando to stump for Clinton.

The presidential trips from the District of Columbia to Charlotte, Philadelphia, and Cleveland would have all been less than one hour, based on flight time estimates from the website FlightManager.com. So, that would mean at least one way, the flights would each be less than $180,118.

Still, for those three presidential round trips, the cost would be about $540,000 combined—most of which taxpayers would absorb. The less than two hours to Orlando and back on Air Force One would cost about $528,000 round trip.

The National Taxpayer Union Foundation has studied presidential travel, determining earlier this year that Obama has officially had the second-most flights abroad of any president except for Bill Clinton. The organization, however, does not track campaign travel separately.

In February 2013, Obama had a trip that mixed official and unofficial business, according to a Government Accountability Office report released last Wednesday.

Obama first flew to Chicago to deliver remarks about the economy, and from there to Palm Beach, Florida, for a vacation. The entire trip cost the Defense Department $2.8 million and cost the Department of Homeland Security $770,000 because of the needed protection from the Secret Service, according to the new GAO finding.

There isn’t a tally on how much Obama has spent on political travel throughout his presidency and what proportion has been reimbursed. However, there were similar tallies for former President George W. Bush.

A 2006 report by the Rep. Henry Waxman, D-Calif., the then-ranking member of the House Oversight and Government Reform Committee, determined that Bush’s travel for Republican candidates in 2002 cost $15.7 million, and the taxpayers covered 97 percent of the expense.

Further, former Vice President Dick Cheney’s travel to campaign events in 2006 cost about $7.2 million, and just $200,000 was reimbursed to the taxpayers, according to the Waxman report.