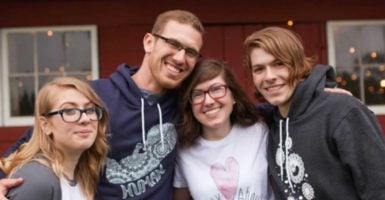 Four siblings spearheading a pro-life apparel company are on a mission to spark everyday conversations about the beauty of life.

“The idea that life is beautiful and that a culture of life is something to be sought after,” Aidan, one of the founders of LifeCulture Apparel, told The Daily Signal.

LifeCulture Apparel, a brand that promotes life through hand-drawn designs on clothing items such as a T-shirts, was launched in September by the Cunningham siblings: Ian, 24; Aidan, 20; Alyssa, 18; and Sophia, 16. “It’s a family venture,” Ian told The Daily Signal in a Skype interview among the four siblings.

As part of a movement to push back against “killing for convenience,” LifeCulture Apparel is designed to help initiate questions and conversation about unplanned pregnancies and adoption in a not-too-pushy, but powerful way. LifeCulture Apparel features hand-drawn designs with messages like “Choose Life” on the shirt above. (Photo: LifeCulture)

“We’d like to be one of the top pro-life apparel brands in the country,” Ian said.

The siblings have been part of the pro-life movement for most of their lives, and while the siblings were homeschooled together, LifeCulture is their first collective project of this magnitude.

“The four of us have incredibly different personalities,” Ian said. “It can definitely be a challenge, but I think it can also be a strength because we always come at things from different angles.”

On LifeCulture’s launch day, the team wrote on their Facebook page:

Us four siblings created LifeCulture to be a positive influence in a negative world. The dream is that we can help prevent the death of millions and millions of humans. That we can show mothers, fathers, and families that there is another option, contrary to abortion. In this culture of death, we want to create a life culture. Fifteen percent of proceeds from LifeCulture’s first 1,500 orders are going to an organization that helps families going through an unplanned pregnancy. (Photo: LifeCulture)

Each sibling plays a role in running the business. Ian operates the supply chain side of the business, Aidan works on website optimization, Alyssa designs and hand draws all the artwork, and Sophia manages social media.

The boys, Ian and Aidan, live in Richmond, Virginia, while the girls, Alyssa and Sophia, live over a couple of hours north in Columbia, Maryland.

For me, I think a lot of the pro-life stuff out there right now is very specific to either one religion or one political group, but we are really big on creating a coalition because we don’t think this should be just a movement for one age or one group or one religion. It really should be anyone who cares about human rights should care about this issue. … I think the way we design the artwork is really an appeal to that beauty of life, the beauty of choosing adoption rather than termination.

“We, together, are the Counter Culture,” the team’s website says.

The sibling team has been working on the LifeCulture concept and getting the company started since the beginning of this year and officially launched on Sept. 1.

“Within the first 24 hours, our launch video had more than 300 shares on Facebook and it was being posted in different organizations and on different pages, so that gave us a lot of traction really quick as far as video views go,” Ian said.

The siblings said they usually come up with a message for a design first, then create artwork that makes the “message pop.”

Inspiration for the designs come “from all of our brains,” Alyssa said.

“We each come up with an idea of some message that we want to get across and then I do quite a bit of sketching until I find something that I like,” Alyssa said. LifeCulture was created “to be a positive influence in a negative world,” the Cunningham siblings say. (Photo: LifeCulture)

Alyssa’s designs on LifeCulture T-shirts, long sleeves, and hoodies have messages including “Let Me Breathe,” “Every Life Should be Allowed to Bloom,” and “Life is Complicated, Love Doesn’t Have to Be.”

“Having something that displays [a pro-life message] in your everyday life whenever you want to wear it is really cool,” the siblings said of the designs. “It just makes people think.”

The siblings ran a pre-sale launch campaign, expecting to meet a 1,500 order goal over the first few months of operation.

“After a lot of deliberation, we’ve decided to end the pre-sale campaign early in order to ensure everyone gets their clothing before Christmas and the National March for Life,” Ian said.

The pro-life rally March for Life takes place on Jan. 27, 2017, in the District of Columbia.

“We’re donating 15 percent of our proceeds from our pre-sale campaign to Talk About Adoption,” Sophia said.

Talk About Adoption is an organization that advocates to “replace abortion with adoption” and is operated by For Youth International, a nonprofit that sends volunteers to help in communities with at-risk youth.

Fifteen percent of all proceeds from LifeCulture’s first 1,500 sales will go to Talk About Adoption.

“They are a group of birth mothers who help anyone going through an unplanned pregnancy,” Sophia said.

The siblings say they have initially gotten a lot of praise for the endeavor.

“I’m just really looking forward to the first time I’m in a random public place and I see a random stranger wearing something that my sister designed,” Aidan said. Ian agreed, “That would be pretty big for me too.”