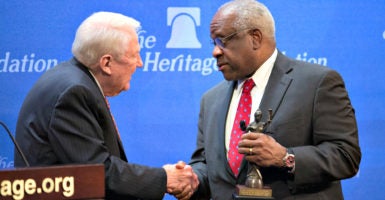 Seventeen members of Congress sent a letter to the secretary of the Smithsonian Thursday, inquiring why U.S. Supreme Court Justice Clarence Thomas was excluded from the National Museum of African American History and Culture.

The Daily Caller News Foundation reported in October that Thomas is only referenced in the new Smithsonian in connection with an exhibit on Anita Hill, the government employee turned law professor who accused him of sexual harassment during his confirmation hearings. Hill is giving prominent billing in a gallery on blacks in the 1990s.

“The background and accomplishments of Justice Thomas are worthy of inclusion in the museum on their own merits,” the letter reads. “Justice Thomas’ contributions to the judicial system through his appointment to the highest court in the country cannot be discounted. It is a disservice to his legacy and to the history of this nation to mention his name in a single caption, but provide no other exhibit showcasing his story.”

“With this in mind, we insist that you provide an explanation about the conspicuous absence of Supreme Court Justice Clarence Thomas from the new museum, and of any future plans to feature him in a permanent exhibit,” the letter adds.

For its part, the Smithsonian has denied it applied any ideological litmus test in preparing its exhibits.

“There are many compelling personal stories about African-Americans who have become successful in various fields, and obviously, Associate Justice Thomas is one of them,” a spokesman said. “However, we cannot tell every story in our inaugural exhibitions.”

“We will continue to collect and interpret the breadth of the African-American experience,” the spokesman added.