College Subsidies for Illegal Immigrants Get Their Day in Court 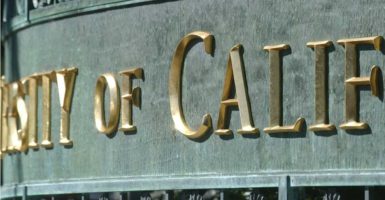 A state appeals court heard the case yesterday, and based on reports from those who attended the oral argument, De Vries (and the taxpayers of California) had a good day in court.

By way of a quick background, the lawsuit involves Section 1621 of the 1996 Illegal Immigration Reform and Immigrant Responsibility Act. That federal immigration law makes illegal immigrants eligible for state or local public benefits but “only through the enactment of a state law … which affirmatively provides for such eligibility.” (8 U.S.C. § 1621(d)).

Because under the California Constitution (Article IX, Section 9(a)), the regents of the University of California are “subject only to such legislative control as may be necessary to insure the security of its funds and compliance with the terms of the endowments of the university … ”

De Vries argued that the decision of the regents to provide subsidies to illegal immigrants was not the act of the state Legislature, and therefore does not meet the requirement of the federal statute.

It is never prudent to predict how an appeals court will rule based on the questions and answers at oral argument. That said, it did appear that the justices were skeptical of the arguments advanced by the attorney representing the regents.

Presiding Justice Dennis M. Perluss and Associate Justice John L. Segal asked all the questions. De Vries was represented by Chris Fedeli of Judicial Watch. As Fedeli began, Perluss asked why Section 1621(d)’s requirement for state legislative action wasn’t an unlawful intrusion into the organization of state government in violation of the 10th Amendment of the U.S. Constitution.

The regents had made a 10th Amendment argument in their brief, but not a very robust one. Fedeli answered that the 10th Amendment doesn’t apply because the U.S. Constitution explicitly reserves all powers over immigration to the federal government, so there is nothing left for the 10th Amendment to reserve to the states.

Fedeli went on to explain that Congress enacted Section 1621(a), which is a blanket prohibition on any state award of benefits to “unlawfully present aliens” (the actual wording of the statute), and no one doubts Congress had the power to entirely prohibit states from giving these benefits.

All §1621(d) does is give limited powers back to the states in an area completely controlled by the federal government, and it lays out a pretty explicit condition that only a state legislative enactment will suffice if a state wants to provide benefits to illegal immigrants.

Fedeli explained that the lower court decision in favor of the regents puts California law into conflict with federal law.

The regents’ interpretation of §1621(d) impermissively either reads the words “only the enactment” out of the statute, or adds the words “law, policy, or regulation” into the statute, and that the California Supreme Court decision in Martinez v. Regents of University of California—which the regents relied on in their brief–in no way decided the question before the court.

The Board of Regents were ably represented by Ben Horwich. He began his argument, predictably, by stating that the decision in Martinez controlled and had decided this question.

He was immediately interrupted by a very suspicious Segal who reiterated the arguments made by Fedeli—namely, that Martinez only found that the state law lawfully gave benefits to California State University and California Community Colleges, and explicitly did not address the University of California students at issue in the current case.

Sensing he was losing on the Martinez argument, Horwich pivoted and argued that §1621(d) could be read to permit the regents to grant in-state benefits to unlawful immigrants. Segal and Perluss hammered him over the word “enactment,” pointing out that in the legislative context, it always means a statute, not a board policy or regulation.

Horwich tried to argue that the only reason §1621(d) was worded that way was to distinguish between state laws “enacted after” the passage of the 1996 welfare reform law, but the justices again seemed unpersuaded.

He then argued that the California state Legislature had publicly announced via statute that it was “inviting” the regents to extend the benefits, so this should satisfy Congress’ intent for political accountability at the state level.

Finding himself almost out of time, Horwich concluded by arguing that the regents are appointed by the governor, plus a few are elected, so they have accountability that way.

In rebuttal, Fedeli argued that Congress could have written “state law or regulation adopted after” the 1996 act, but it deliberately did not do so, and that even if the word “enactment” was as fuzzy as the regents think, they still have to explain the word “only,” which signals Congress’ intent to exclude certain kinds of state laws.

Fedeli explained that Congress uses the phrases “state law” and “state law and regulation” next to each other so often (47 times just counting the appearance of both phrases within this statute) to differentiate and limit particular state actions in federally preempted areas that the word choice in §1621(d) has to be read as intentional. It can only be read to mean state legislative action.

Finally, Fedeli argued that the political accountability requirement of §1621(d) was not satisfied by the California Legislature “inviting” the regents to extend benefits. Rather, this is exactly the kind of buck-passing tactic that Congress intended to prohibit.

No one knows how California voters would react to the Legislature extending benefits to University of California students because the Legislature has not taken that action and the people have not had a chance to vote them out of office for it.

Fedeli concluded by arguing that we don’t know whether the voters feel the same about benefits to California State University students and University of California students because the overwhelming majority of the regents are appointed and can’t be voted out of office.

Now we have to wait for the justices to issue their written ruling. Even if De Vries wins at the Second Appellate District Division 7, the regents would still have the option to appeal to the California Supreme Court. And depending on how that court rules, it could end up at the U.S. Supreme Court.