The Health Care Plan That Promises to Protect Your Religious Beliefs 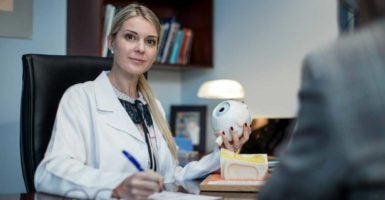 With open enrollment for Obamacare now open, one health care organization is encouraging people to purchase insurance coverage that respects their conscience and religious beliefs.

The organization hosted a panel Wednesday in the District of Columbia metro area featuring representatives from both the legal and medical profession.

“It’s open enrollment and millions of Americans will be making decisions for themselves about what health care program to choose,” said Louis Brown, director of CMF CURO. “We are here today to urge people of goodwill to make health care choices that respect life and human dignity.”

Brown said that it is the group’s goal for Americans across the country to choose plans “consistent with the culture of life.”

While the Obamacare mandate is viewed in many respects as a negative presence in the health care industry, moderator Kathryn Jean Lopez, editor-at-large for National Review Online, said that it has strengthened the resolve of what health care is, specifically Catholic health care.

“One of the blessings of the Obamacare mandate is that it has forced us to look at the question, ‘What is Catholic health care now?’” Lopez said.

Dr. Lester Ruppersberger, the president for the Catholic Medical Association, said that Obamacare has essentially done the opposite of what it promised to do.

“Forty-six percent of uninsured adults say that they tried to get coverage, but could not afford it,” Ruppersberger said. “The miss-insurance of America is a universal phenomenon. This crisis is affecting the parent-physician relationship.”

According to Ruppersberger, he believes the Catholic Church is well-equipped to have a massive impact in the health care market.

“The Catholic Church is the largest provider of health care outside of the U.S.,” Ruppersberger said. “The [Catholic] Church manages 26 percent of the world’s health care.”

The challenge, according to Ruppersberger, is to create new incentives that work for families and individuals so that they can make decisions based on their conscience.

Ruppersberger believes there are six primary tenets to achieving this goal:

Dr. Marguerite Duane, a board-certified family physician and adjunct associate professor at Georgetown University, said she believes the crisis in the health care community stems from the fact that the industry is grossly overpriced.

The solution to this problem, according to Duane, is to offer the option of a direct primary care program that “restores the physician-patient relationship.”

“When you actually spend time with your patients and get bureaucracy out of the waiting room … direct primary care works for everyone. It can be affordable,” Duane said.

“In states where physician-assisted suicide is legal,” Bowman said, “patients with terminal illnesses are forced to see doctors who think death and life are options.”

Due to the high stakes of a new Congress taking over after the election, Brown, the CMF CURO director, emphasized that the health care debate is critically important regarding matters of religious freedom.