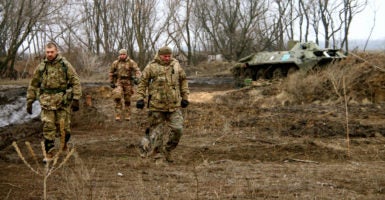 Ukraine rapidly rebuilt its military after the war began in 2014. (Photo: Nolan Peterson /The Daily Signal)

KYIV, Ukraine—Countries across Eastern Europe are militarizing to defend themselves from Russia, underscoring how Kremlin brinkmanship could spark a regional conflict.

“If you’re in Estonia, or Latvia, and Russia’s sitting there on your border, it’s scary,” Jill Russell, teaching fellow in the Defense Studies Department at King’s College London, told The Daily Signal. “And those countries want a capability to defend themselves.”

And by going outside the protective umbrella of NATO and U.S. security guarantees, the military buildup in post-Soviet Europe highlights a budding rift in security priorities across the Continent.

“The states of Eastern Europe inevitably see their security focus as being the need to deter an increasingly antagonistic Russia,” said Ben Wheatley, honorary research fellow in the School of History at the University of East Anglia in the United Kingdom. “Therefore, the Eastern European states concentrate on building up their conventional armed forces to meet this threat.”

“The closer you are to Russia, the more you don’t care about terrorism,” Russell said. The war in Ukraine has killed about 10,000 people and sparked fears of Russian aggression across Eastern Europe. (Photos: Nolan Peterson/The Daily Signal)

Recent media headlines have painted modern East-West tensions as a new Cold War. However, some experts say the military buildup among post-Soviet countries across what the Kremlin considers its “near abroad” (essentially the former territory of the Soviet Union) might be the early stages of a regional arms race, and a reflection of centuries-old power struggles.

“Russia’s near abroad has once again become a flashpoint,” Russell said, adding:

But there’s not an ideological component, that is what defined the Cold War. Russia wants to show it’s still a great power … This isn’t at all like the Cold War.

What we are really in is a standard power struggle over frontiers. What’s unfortunate is that the frontier countries are peopled with those not necessarily interested in being pawns in a great power struggle—and are wanting to break free from Russian dominion.

“There is no doubt the conflict in the East is a localized affair rather than a new Cold War,” Wheatley told The Daily Signal.

Latvia, Lithuania, and Estonia—NATO’s three Baltic member countries—increased their collective spending on new military equipment from $210 million in 2014 to $390 million in 2016, according to a report by IHS Jane’s, a commercial British defense analysis and intelligence firm.

Latvia and Lithuania have had the two fastest-growing military budgets in the world since 2014, according to IHS Jane’s.

“This growth is faster than any other region globally,” Craig Caffrey, principal analyst at IHS Jane’s, said in the report. “The increase in defense spending in the Baltics is largely linked to the growing confrontation between Russia and the West, often described as the ‘new Cold War,’” said Alex Kokcharov, principal analyst at IHS Country Risk. “We have seen political confrontation between Russia and the West in the past two and a half years escalate to military assertiveness, and we don’t see this ending anytime soon.”

Poland, also a NATO member, has doubled its military spending since 2006, reaching $9.2 billion in 2016. Polish military spending has increased in eight of the past 10 years, with an 18 percent jump in 2015 alone.

For its part, the Kremlin also boosted its military spending by 28.6 percent in 2015—Russia’s largest defense budget increase since 2002.

This combination of escalating military firepower and the will to use it has some worried that a miscalculated act of brinkmanship, or nationalistic fervor run awry, could spark a broader regional conflict.

“They [Russia] are operating where they were always operating, in their near abroad,” Russell said. “Everything is about taking back territory that was historically Soviet.”

Tensions with Russia have been spiraling toward a nadir since the Kremlin annexed Ukraine’s Crimean Peninsula in 2014 and followed up with military operations in eastern Ukraine.

Russian military brinksmanship has taken many forms across the region, including the buzzing of NATO ships and aircraft by Russian warplanes, subversive propaganda campaigns, cyberattacks, and covert efforts to stir up separatism among minority Russian populations.

Contributing, more broadly, to the breakdown in relations between Russia and the West are accusations of Russian cyberattacks to affect the U.S. presidential election, and Moscow’s financial support for far-right political parties in Western Europe.

The deployment of military hardware and troops to Russia’s Kaliningrad exclave and occupied Crimea (including bombers and missiles capable of carrying nuclear weapons) and Russia’s scorched-earth bombing campaign in Syria also have the West on edge.

For the time being, the Baltic states and Poland haven’t given up on NATO. In fact, the alliance’s military presence in Eastern Europe is set to expand dramatically. To reassure its eastern members and to send a message of deterrence to Moscow, NATO has announced plans to deploy military units to Eastern Europe in numbers unmatched since the Cold War.

At the NATO summit in July in Warsaw, Poland, alliance leaders formally announced the planned deployment of four combat battalions to Poland, Estonia, Latvia, and Lithuania on a rotational basis beginning next year.

The battalions will be fielded by Canada, Germany, the United Kingdom, and the United States. The U.K. announced last week that it was bolstering its planned force to be stationed in Estonia from 500 to 800 troops.

These deployments are in addition to a previously announced U.S. plan to deploy about 3,500 troops to Eastern Europe on a rotational basis.

The deployments are considered “tripwire forces,” presumably meant to deter Russia from an attack due to the risk of spurring a massive NATO response to defend forward units.

“They’re really just notional forces,” Russell said, referring to the NATO units. “They’re not at all capable of doing anything offensive into Russia.”

The rotational NATO units planned for the Baltics and Poland are not a realistic threat to Russian forces, Wheatley said, but they have a deterrence value.

“Their installment in reality guarantees peace in the Baltic region and Poland, as Russia would never attack NATO units in open conflict,”  the U.K. research fellow said.

U.S. warplanes and land units constantly cycle through Eastern European countries in an ongoing series of exercises. The U.K. also has announced it will send Typhoon fighters to Romania as part of an air policing mission.

Paralleling the rise in defense budgets, the ranks of civilian volunteer militias in the Baltic countries have swelled since Russia’s military intervention in Ukraine in 2014. The change reflects the deadly seriousness with which politicians and populations in the region consider the possibility of war with Russia.

Conscription has been reinstated in Lithuania, where the government also recently issued a guerrilla warfare manual for the country’s 3 million citizens.

Civilians of all stripes spend their weekends tramping through forests with heavy rucksacks, training in military skills such as how to lay landmines and plant booby traps. Ukraine’s soldiers live a Spartan life on the front lines in the Donbas.

Like many post-Soviet countries, the legacy of World War II paramilitary units runs deep in the Baltic states and Poland, where citizens fought against both Nazi and Red Army invaders.

Tensions with Russia also have rattled longtime NATO holdouts Sweden and Finland. The two Scandinavian countries, which claimed to be neutral interlocutors between NATO and the Soviet Union during the Cold War, have forged closer ties with the Western military alliance since 2014.

Ukraine is the epicenter of modern East-West tensions, and could be a flashpoint for future conflicts.

A war between Ukraine’s armed forces and a combined force of pro-Russian separatists and Russian regulars has killed 10,000 people and displaced about 1.7 million from their homes in the Donbas, Ukraine’s embattled southeastern territory on the border with Russia.

Despite a 17-month-old cease-fire, heavy artillery, rocket attacks, and tank shots still occur daily along the front lines in the Donbas. So do military and civilian casualties.

The war in Ukraine has not spilled over into a broader conflict involving NATO countries as many feared it would in 2014.

Today, NATO members such as the U.S., Canada, and Poland have military training missions ongoing in Ukraine, but NATO troops are not directly involved in combat operations in the Donbas.

“There was never any possibility of NATO combat troops being stationed in Ukraine,” Wheatley said.

The Ukrainian military was a ragtag force in the opening days of the conflict. Its soldiers were not prepared for combat, and reserves of weapons and ammunition had been depleted by decades of plundering by corrupt oligarchs and arms dealers.

In a speech at a military parade on Ukrainian Independence Day, Aug. 24, Ukrainian President Petro Poroshenko signaled a long-term plan to build up the nation’s military to counter the Russian threat.

Even though Ukraine has a long way to go to match Russian firepower, some fear the current conflict could spark an arms race between the two former Soviet states.

Since the war in the Donbas began in 2014, Ukraine has fielded more than 300,000 soldiers, both recruits and draftees.

Ukraine increased its military budget by 23 percent in the year after the war began, and military spending is set to increase by 10 percent each year going forward.

The composition of Ukraine’s armed forces also has evolved during the past two years. Despite a cease-fire, fighting is still ongoing in eastern Ukraine.

To boost recruitment, military officials bumped up the salary for active duty volunteers to about $275 a month—well above Ukraine’s monthly minimum wage of about $54.

Ukraine also reconstituted its National Guard, folding into its ranks the myriad civilian volunteer battalions that formed in the early days of the war when the regular army was caught on its back foot.

After more than two years of war, there also has been a turnaround in Ukrainians’ attitudes toward military service. In the post-Soviet period, military service was not held in high regard in Ukraine, and often was considered a life path for those with limited options.

Today, soldiers in uniform are a common sight on the streets and train stations of any Ukrainian city or town. Veterans groups have sprouted up, and a subculture of bearded war veterans wearing stylized T-shirts—much in the model of America’s post-9/11 veteran generation—has emerged.

“Soldiers and officers will feel once again not only their social responsibility, but also society’s respect and esteem to their defenders,” Poroshenko said at the Independence Day parade.

“This parade will signal to our international partners that Ukraine is capable of defending itself, but requires further support,” Poroshenko said. “Finally, our parade is a signal to our enemy as well. Ukrainians are ready to carry on the fight for their independence.”