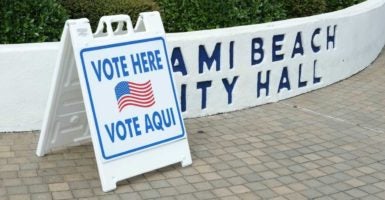 Numerous other election irregularities such as voting beyond the grave, voting more than once, voting without citizenship, and registrations by nonexistent people have occurred throughout 2016. While some cases have been prosecuted, others were discovered through various news reports.

Here’s a sampling of election irregularities that have already taken place well in advance of Nov. 8.

“Any such offense is extremely serious and can degrade the confidence we as citizens justly have in our system of elections,” @AlexandriaVAGov says.

On Oct. 28, Vafalay Massaquoi, 30, of Alexandria, Virginia, was arraigned on two felony charges of voter registration fraud and two felony counts of forging a public record, according to the Alexandria Commonwealth’s Attorney’s Office.

Massaquoi worked for New Virginia Majority, a progressive community organizing group, earlier this year when he allegedly fabricated names on voter registration forms. The Alexandria Office of the General Registrar, which oversees elections in the city, flagged the matter and reported it to prosecutors in June.

“Given the recent public attention to claims of election fraud, I think it is important to note that there is no allegation that any illegal vote was actually cast in this case,” Bryan L. Porter, Alexandria Commonwealth’s attorney, said in a public statement, adding:

Furthermore, since the fraudulent applications involved fictitious people, had the fraud not been uncovered, the risk of actual fraudulent votes being cast was low. However, any such offense is extremely serious and can degrade the confidence we as citizens justly have in our system of elections.

Massaquoi left Alexandria before police could make an arrest in July, authorities said. After what Porter called a “lengthy search,” police arrested him near Philadelphia in early October and extradited him to Alexandria on Oct. 27 to face arraignment the next day.

Rote was charged with first-degree election misconduct, a Class D, or less serious, felony in Iowa. She reportedly was booked in the Polk County Jail Oct. 27 and released the next day.

The Des Moines Register reported that Rote cast an early ballot at the Polk County Election Office and another at a county satellite office in Des Moines.

Rote was among three suspects reported to police by Polk County Auditor Jamie Fitzgerald. Others were accused of casting mail-in votes, then early voting in-person, but neither was charged, according to the Des Moines Register.

Rote’s court appearance is set for Nov. 7, one day before the election.

Miami-Dade State Attorney Katherine Fernandez Rundle announced Oct. 28 that two women were charged with election violations. One was charged with registering phony or dead voters, the other with changing votes on mail-in ballots.

Tomika Curgil, 33, was a canvasser for People United for Medical Marijuana, where she was hired to register voters. However, the Miami-Dade Elections Department couldn’t verify much of the voter information, or whether the names submitted were of people eligible to vote.

Authorities said they believe Curgil never left her home before returning completed and falsified voter registration forms. They said discrepancies include registering dead voters, according to the Miami-Dade prosecutor’s office.

Curgil was charged with five counts of submitting false voter registration information, which is a third-degree felony in Florida.

In the other Florida case, Gladys Coego, 74, was hired as a temporary election worker for the Miami-Dade Elections Department to open absentee ballots. A co-worker reported that Coego marked some of the ballots.

According to the prosecutor’s office, Coego admitted to investigators she marked several absentee ballots for mayoral candidate Raquel Regalado when that race was left blank.

Coego was charged with two counts of marking or designating on the ballot of another person, a third-degree felony.

“Anyone who attempts to undermine the democratic process should recognize that there is an enforcement partnership between the [Miami-Dade] Elections Department and our Prosecution Task Force in place to thwart such efforts and arrest those involved,” Rundle said in a written statement. “Now we need to move forward with the election.”

4. Dead and Double Voting in Colorado

CBS4, a TV station in Denver, conducted a broad voter fraud investigation that found numerous cases of dead voters and people voting more than once. The report aired in September.

The station cross-referenced databases to find a particular problem in El Paso County and Jefferson County, and the findings triggered a criminal investigation, CBS4 reported.

CBS4 aired a follow-up piece Oct. 25 noting six cases in which records show people voting twice in Colorado elections during the same election cycle, while six others voted in Colorado and another state’s elections. Five of the cross-state votes cast a vote in Kansas as well as Colorado, the station reported.

5. 19 Dead Re-Registered to Vote in Virginia

In another Virginia case, the FBI and Virginia law enforcement found in late September that at least 19 dead people were re-registered to vote in the state. All 19 were registered in the city of Harrisonburg, The Washington Post reported.

The investigation commenced after family members of some of the deceased received voter registration notifications. The forms reportedly were filled out by a group trying to sign up voters on the James Madison University campus in Harrisonburg.

Not all of the alleged fraud is taking place in swing states. New York and California have had problems as well.

In at least one case, a dead person is being encouraged to vote by the state of New York. Unlike elsewhere, a lack of pulse kept one individual from casting a ballot.

Michelle Dimino, of Queens, doesn’t want her father to be registered to vote any longer. That’s because he died in 2012. Yet, the New York Board of Elections keeps sending Anthony Baldomir absentee ballots.

>>> 3 Examples of Voter Fraud Across US

Dimino informed the board numerous times that her father died and was no longer eligible to vote, but the ballots keep coming.

So she went public with the complaint, the New York Post reported in October.

Baldomir was a registered Democrat.

“In 2013, 2014, 2015, and again this year, I received absentee ballots for my father. I could have fraudulently voted with those ballots, but I shredded them instead,” Dimino told the Post.

Baldomir was ill in 2012 and was receiving medical care when he requested an absentee ballot, the Post reported.

New York Board of Elections spokeswoman Valerie Vazquez confirmed to the newspaper that Baldomir was still on its “permanent absentee ballot list.”

Complaints reportedly came primarily from Republicans, but voters in both parties were affected, Hestrin said. Party affiliation mattered for the June 7 primary, where numerous Republicans cast provisional ballots. Any impact on the Nov. 8 election remains to be seen.

The incident exposes security problems, since someone was able to access voter information and change it in at least one California county. But it wasn’t the only issue in California.

In May, another TV station affiliated with CBS found hundreds of dead voters in Southern California, most of them from Los Angeles County.

CBS2 compared millions of voting records from the California secretary of state’s office with death records from the U.S. Social Security Administration. Based on this, the station determined that 265 people voted from beyond the grave. At least one individual who died in 2003 is recorded to have voted in 2004, 2005, 2006, 2008, and 2010.