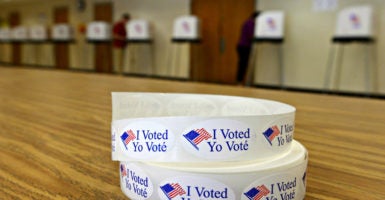 While the issue of term limits has waned since its high point in the 1990s, just outside Washington it’s on the ballot and appears to have broad support in a predominantly Democratic county with about 1 million residents.

Voters in Montgomery County, Maryland, will decide Question B, which would limit the terms of the elected county executive and members of the all-Democrat county council to no more than three consecutive four-year terms.

Though it’s a single county, it could resurrect a national trend, said local activist Robin Ficker, a former Republican candidate for the council and other offices who has campaigned for multiple ballot questions in the county over more than four decades.

“We’ll know on Nov. 8. if term limits pass here in the bedroom of the nation’s capital, I think they can pass anywhere,” Ficker told The Daily Signal in a phone interview.

Ficker, 73, previously succeeded in collecting enough signatures to put term limits on Montgomery County’s ballot, but voters rejected the idea in 2000 and again in 2004.

“It is condescending to say there are no other experts in the county,” @mocotermlimits says.

This year, the chance of passing Question B is “way, way better,” he said.

That may be in part because nine members of the Montgomery County Council voted this year to increase property taxes by 8.7 percent and voted in 2013 to give themselves a 17 percent pay increase, among other matters that rubbed fiscally conservative voters the wrong way.

The council oversees a government with 9,000 employees, an annual county operating budget of $5.3 billion, and a five-year construction budget plan of $4.6 billion. It also signs off on a public schools budget of $2.4 billion.

“Our group is made up of many people from a variety of parties and views that don’t like the way the council is disrespecting them. It’s like they are saying, ‘We are the experts and know better,’” said Ann Guthrie Hingston, a member of MoCo Term Limits, the group that gathered signatures.

Most of these went into effect in the 1990s, a decade when 16 states enacted term limits. Five other states added term limits between 2000 and 2004, according to the advocacy group U.S. Term Limits.

The Washington Post reported that a total of 66 state and local governments adopted term limits in the 1990s.

While term limits aren’t on any state ballots Nov. 8, voters in the city of Honolulu will decide whether to limit the terms of the mayor, prosecuting attorney, and council members in Hawaii’s capital.

Most members of the Montgomery County Council have served more than 12 years, Hingston said.

Hingston, a retired federal employee, noted the limit would be three consecutive terms, allowing a council member or county executive to run again.

However, Tom Moore, chairman of the group No on B, contends that less experienced council members will be more beholden to lobbyists. Term limits also have never been a successful silver bullet in other areas, he said.

“There is no evidence that term limits are a fix, it’s just a false bill of goods,” Moore told The Daily Signal in a phone interview.

The council passed a plan in 2014 to allow candidates for county executive and county council to voluntarily opt in to a public financing program.

“Public financing of campaigns will take effect in 2018. I think we should give that a chance to work in breaking one-party government.”

Moore added that this term limits proposal is more restrictive than most in the United States because it is retroactive. Five of the nine council members would be ineligible to run for another consecutive term if the measure passes.

Moore, a Democrat who previously served on the Rockville City Council, said he disagreed with some of the actions the Montgomery County Council has taken. But if voters are upset, he said, the answer is to hold incumbents accountable during elections.

“Montgomery County voters have rejected limited terms twice and I’m confident they will do it again,” Moore said.

Hingston dismisses the key argument by opponents of Question B on the ballot, which is that institutional experience is important.

“It is condescending to say there are no other experts in the county,” Hingston told The Daily Signal in a phone interview.

“There is a huge number of people in Bethesda with graduate degrees, and many have experience working in government. To think no one else is qualified to step in is ridiculous.”