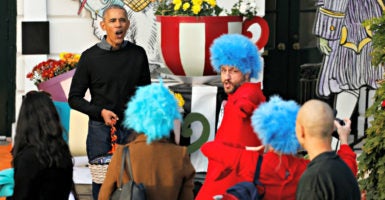 As open season begins Tuesday for enrollment in Obamacare next year, most customers for health insurance in the individual market will face both fewer choices and higher premiums under President Barack Obama’s signature health care law.

More than three-fifths of the states, 33 of them, will have fewer insurers offering coverage on the Obamacare exchanges than they did in 2016.

Arizona and Texas are each losing six insurers, while two other states—Kentucky and Ohio—are losing four each. Only one state, Virginia, will have more exchange insurers next year than this year.

Five states—Alabama, Alaska, Oklahoma, South Carolina, and Wyoming—will have only one insurer offering exchange coverage in 2017, while another 13 states will have only two.

So exchange customers in two-thirds (68.7 percent) of U.S. counties will be faced with either a monopoly or a duopoly in health insurance.

At the same time, insurers also have increased premiums significantly. The Department of Health and Human Services, which oversees Obamacare, had to admit that premiums are increasing by an average of 25 percent in the 39 states using the federally run insurance exchange.

The Obama administration has tried to spin this news by repeatedly stating that 85 percent of customers on one of the state insurance exchanges receive taxpayer-funded subsidies for their coverage, which will soften the blow to their wallets.

While that is technically true, it offers an incomplete and misleading picture.

The most recent comprehensive enrollment data show that 17.7 million Americans had health coverage from the individual market as of the end of 2015. Of that number, 7.4 million (42 percent) had coverage subsidized by taxpayers, while the remaining 10.3 million (58 percent) paid the full cost on their own.

Because the Affordable Care Act bars insurers from charging off-exchange customers a different premium than on-exchange customers for the same plan, nearly 60 percent of those with individual market coverage will face the full cost of any premium increases.

Consider the likely reactions of those 10 million Americans as they open letters from their insurers informing them of their premium increases—or, worse, that their health care coverage is being discontinued.