Elizabeth Warren Has It Wrong on Voter Fraud 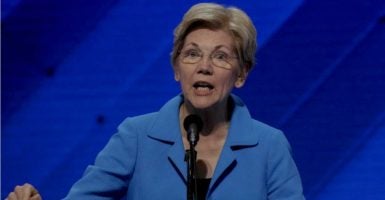 Last week, Sen. Elizabeth Warren, D-Mass., penned an op-ed for The Washington Post equating loose rhetoric by a political opponent with legitimate concerns expressed by many about inadequate safeguards in our electoral system.

The op-ed is a classic sleight of hand, reducing a discussion about a topic as serious as election integrity to an ad hominem attack.

For the senator, such antics are necessary because the facts simply do not bear out the progressive position. The simple fact is that election fraud often goes undetected.

Overburdened prosecutors frequently assign vote fraud cases a low priority, particularly after an election is over. Moreover, many states lack the procedural tools necessary to detect fraud before or after it occurs.

And while many progressives, including the senator, quote a study purporting to indicate that voter fraud is vanishingly rare, that analysis is constricted to a single type of fraud, in-person impersonation fraud.

Many Forms of Fraud

Left out of that report are the countless other forms electoral fraud can take, from the casting of fraudulent absentee ballots, to illegal efforts by partisans to “assist” voters in filling out their ballots, to voters who habitually vote in multiple states.

The Heritage Foundation’s voter fraud database also documents massive conspiracies to buy votes, felons and noncitizens convicted of voting despite their ineligibility, and multiple elections overturned because of the sheer number of fraudulent ballots cast.

Indeed, the senator need look no further than her own state for proof that voter fraud exists. In 2012, former state Rep. Stephen “Stat” Smith pleaded guilty to two counts of voter fraud.

Smith ran a scheme in which he obtained absentee ballots for people he knew to be ineligible to vote, even going so far as mailing in ballots on behalf of voters without their knowledge. Smith received a four-month prison sentence.

Warren denounces voter ID laws and other electoral integrity measures as being designed to “disproportionately suppress turnout by Democratic voters” or otherwise “delegitimize Democratic voters.” Yet, it is often those very voters who are the victims of election fraud.

Again looking to Massachusetts, in 2013, Enrico “Jack” Villamaino, former Republican selectman and candidate for the state House of Representatives, illegally modified the party affiliations of 280 voters, changing them from registered Democrats to “unenrolled” voters.

He schemed to request absentee ballots in their names to guarantee himself additional votes in the 2012 Republican primary while denying them the right to participate in the Democratic primary. Villamaino pleaded guilty to multiple felony charges and served four months in prison.

A few months ago, the results of a Democratic primary for Missouri’s 78th House District were thrown out because of widespread absentee ballot fraud. The incumbent, Penny Hubbard, lost the in-person vote in the first election, but won based on the lopsided support she seemingly enjoyed among absentee voters.

However, upon closer examination, it turned out that many of the absentee ballots were improperly recorded. A judge ordered a redo, and Hubbard’s Democratic challenger defeated her by a whopping 1,533 votes.

At the end of the day, this is what the issue of electoral integrity is all about—ensuring that every legitimate vote cast is counted, and that elections accurately reflect the will of those voters. After all, every illegitimate ballot negates a legitimately cast vote.

To that end, states must put in place reasonable safeguards to ensure that only legitimate voters are able to cast ballots, while not unreasonably burdening eligible citizens seeking to exercise their rights.

In 2008, in Crawford v. Marion County Election Board, the U.S. Supreme Court upheld the constitutionality of Indiana’s voter identification law, concluding that requiring photo identification to vote is not an unreasonably burdensome requirement.

The majority opinion was written by Justice John Paul Stevens. Although long recognized as one of the more liberal members of the Court, Stevens spent many years practicing law in Chicago, a city with a rich tradition of voter fraud.

But one does not need to read Supreme Court opinions to see that voter ID laws are hardly as burdensome as many activists claim. Common sense will do.

Our society requires the presentation of photo identification to buy alcohol, board a plane, get a prescription, drive a car, enter a bar during evening hours, and obtain a meeting with some of the very same politicians who today denounce photo ID laws as unduly burdensome or racially discriminatory.

Common sense will not stop activists, however. Adverse opinions in cases out of Texas, North Carolina, and Wisconsin overturned photo ID laws and other election measures, denouncing them as racially motivated.

Yet, as Heritage senior legal fellow Hans von Spakovsky points out, in the Texas and North Carolina cases, the challengers could not identify a single disenfranchised minority voter.

In the Texas case, 5th U.S. Circuit Court of Appeals Judge Edith Jones penned a powerful dissent, noting that the “multi-thousand-page record yields not a trace, much less a legitimate inference, of racial bias by the Texas Legislature.” The majority opinion, according to Jones, “misconstrues the law, misapplies the facts, and raises serious constitutional questions.”

Progressives smell blood in the water, and will continue their legal barrage anywhere that reasonable efforts to secure the vote have been enacted. The future integrity of our elections—the very core of our democracy—may hinge on who fills the Supreme Court vacancy left by the late Antonin Scalia.

It’s long past time to acknowledge that voter fraud is a real, nonpartisan issue, and take sensible measures to secure the ballot box.