The Astonishing Ignorance of Young Adults 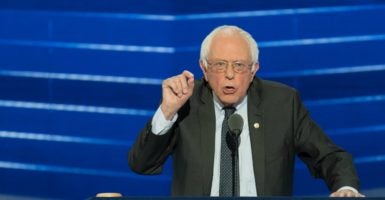 Do you wonder why Sen. Bernie Sanders and his ideas are so popular among American college students? The answer is that they, like so many other young people who think they know it all, are really uninformed and ignorant. (Photo: Richard Ellis/Zuma Press/Newscom)

Do you wonder why Sen. Bernie Sanders and his ideas are so popular among American college students? The answer is that they, like so many other young people who think they know it all, are really uninformed and ignorant. You say, “Williams, how dare you say that?! We’ve mortgaged our home to send our children to college.”

Let’s start with the 2006 geographic literacy survey of youngsters between 18 and 24 years of age by National Geographic and Roper Public Affairs.

By the way, when I attended elementary school, during the 1940s, we were given blank U.S. maps, and our assignment was to write in the states. Today, such an assignment might be deemed oppressive, if not racist.

According to a Philadelphia magazine article, the percentage of college grads who can read and interpret a food label has fallen from 40 to 30. They are six times likelier to know who won “American Idol” than they are to know the name of the speaker of the House. A high school teacher in California handed out an assignment that required students to use a ruler. Not a single student knew how.

Reported by Just Facts, in 2009, the Pentagon estimated that 65 percent of 17- to 24-year-olds in the U.S. were unqualified for military service because of weak educational skills, poor physical fitness, illegal drug usage, medical conditions, or criminal records. In January 2014, the commander of the U.S. Army Recruiting Command estimated this figure at 77.5 percent, and in June 2014, the Department of Defense estimated this figure at 71 percent.

A few weeks ago, my column discussed the dishonesty of college officials. Here’s more evidence: Among high- school students who graduated in 2014 and took the ACT college readiness exam, here’s how various racial/ethnic groups fared when it came to meeting the ACT’s college readiness benchmarks in at least three of the four subjects: Asians, 57 percent; whites, 49 percent; Hispanics, 23 percent; and blacks, 11 percent.

However, the college rates of enrollment of these groups were: Asians, 80 percent; whites, 69 percent; Hispanics, 60 percent; and blacks, 57 percent.

What I am labeling as dishonest, fraudulent, or deceitful comes from the fact that many more students are admitted to college than are in fact college-ready. Admitting such students may satisfy the wants and financial interests of the higher education establishment, but whether it serves the interests of students, families, taxpayers, and the nation is another question.

To accommodate less college-ready students, colleges must water down their curricula, lower standards, and abandon traditional tools and topics.

Emory University English professor Mark Bauerlein writes in his book “The Dumbest Generation”: Tradition “serves a crucial moral and intellectual function. … People who read Thucydides and Caesar on war, and Seneca and Ovid on love, are less inclined to construe passing fads as durable outlooks, to fall into the maelstrom of celebrity culture, to presume that the circumstances of their own life are worth a webpage.”