Media Made Right Call to Ignore Climate Change in Debates 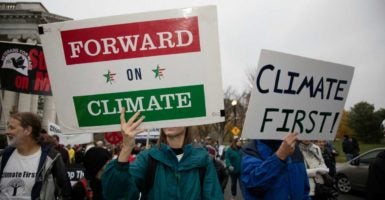 To the dismay of some pundits, celebrities, and environmental activists, three presidential debates produced zero questions on global warming. Simply wishing an issue to be a priority won’t make it one.

Americans and people around the world are apathetic to taking action on climate change. And for good reason. Chicken Littles have incorrectly predicted doomsday scenarios and, even in the event of climate catastrophe, costly policies offer a nonsolution.

Both domestic and international polls demonstrate how little individuals want to take action on global warming and even more important, how little they’re willing to pay for it.

Take, for instance, the United Nations’ “My World” survey that asked individuals to choose six issues that “are most important for you and your family.” Nearly 10 million people have responded, and out of a list of 16 issues, “action taken on climate change” ranked dead last. Education, health care, and better job opportunities came in as the top three.

Even climate polling data spun as encouraging isn’t all that impressive. A March Gallup poll reports that concerns over climate change are at an eight-year high. But that headline alone doesn’t provide the full context.

While the percent of Americans who worry about global warming a great or fair deal is up to 41 percent (the  highest since Gallup asked the question in 1998), 57 percent still do not perceive global warming as a serious threat.

Another allegedly encouraging poll comes from a recent survey conducted by the Energy Policy Institute at the University of Chicago and the AP-NORC Center. The New York Times heralded the results as “Americans Appear Willing to Pay for a Carbon Tax Policy.”

But just how much are Americans willing to pay? A measly buck a month. Fifty-seven percent of respondents were willing to pay an additional dollar per month on their electricity bill to combat climate change. Forty-two percent weren’t even willing to pay that much. For proponents of an aggressive carbon tax, that’s not very encouraging.

At $20 a month, the public is more than 2-to-1 against paying to combat climate change, which is more telling that there’s no real appetite for this. Importantly, the poll fails to include how much abated warming Americans would receive from paying an additional $1, $20, or $50 per month. In every scenario, the answer is next to nothing.

Even if the U.S. cut 100 percent of its carbon dioxide emissions (which would cost Americans a lot more than $50 per month), it would not make any meaningful impact on projected warming.

Using the same estimated climate impact from a doubling of carbon dioxide emissions that the Intergovernmental Panel on Climate Change assumes in its modeling (which is arguably higher than reality), the world would only be 0.137 degrees Celsius cooler by 2100 if the U.S. shut down its entire economy.

The entire industrialized world could cut carbon dioxide emissions by 100 percent and the result would be a whopping 0.278 degrees Celsius cooler by the turn of the century. Let’s see how our grandchildren feel about that sacrifice.

Polling data alone certainly isn’t a reason to ignore an issue. But the reality that we’re not headed toward catastrophic warming and  costly policies that ripple through the economy won’t mitigate global temperatures most certainly are.

This article has been corrected to note that while Gallup polls show those worried about global warming a great deal is at a high since 1998, 57 percent of people do not perceive it as a serious threat.