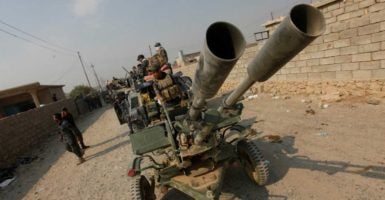 ISIS military setbacks have been far more devastating to their cause than the State Department's social media campaign against them. (Photo: Alaa Al-Marjani/Reuters/Newscom)

Military advances against Islamic State-, or ISIS, held territory in Iraq and Syria have produced a welcome byproduct: a marked decline by 70-80 percent in the output of social media propaganda by the terror group.

ISIS fighters were recently chased out of the Syrian village of Dabiq by Syrian rebel forces without offering much resistance (despite Dabiq’s apocalyptic symbolic significance in ISIS lore), and the battle of Mosul has begun as Kurdish, Iraqi, and U.S. forces tighten the noose around ISIS’ largest stronghold.

A new report by West Point’s Combating Terrorism Center, “Communication Breakdown: Unraveling the Islamic State’s Media Efforts,” describes in detail the impact of military action on ISIS’ capacity to wage ideological warfare. Promising the coming of the caliphate and portraying the Islamic State as utopian reality about to happen has become all but impossible.

Not only that, but continued bombardment has destroyed much physical infrastructure, film studios, computers, and buildings housing the ISIS internet operation. The death of chief propagandists has equally affected ISIS efforts to draw recruits.

Over the past year, as the military strategy of combating ISIS has intensified, the number of foreign fighters flowing into Syria and Iraq from abroad has dropped from some 1,500 a month to 200. At its most prolific, August 2015, ISIS released more than 700 items in one month from official outlets. This August, after a year of airstrikes and other attacks, that number had dropped to less than 200 items.

The decline in ISIS social media activity has also been noticed at the U.S. Department of State, which takes the U.S. government’s lead in counter messaging.

This week, Rick Stengel, the undersecretary for public diplomacy, told The Chicago Maroon—the student newspaper of the University of Chicago—that he ascribed the drop in ISIS propaganda and recruitment to the success of a new public diplomacy strategy at the State Department, though without any actual evidence to support it.

The State Department’s new strategy consists of subcontracting countermessaging to U.S. allies in the Muslim Middle East through its Global Engagement Center (formerly known as the Center for Strategic Counterterrorism Communication). The approach of working with Muslim countries and offering training and support to Muslims opposing ISIS online is not without merit, but hardly the primary cause of the decline in ISIS propaganda we are seeing.

A recent study by Rand Corp., “Examining ISIS Support and Opposition Networks on Twitter,” analyzed 10 months of Twitter data between July 2014 and May 2015. It showed that even then, ISIS did not actually dominate the Twitter universe. For every ISIS supporter, there were six ISIS opponents active on Twitter.

However, due to the relentless productivity of the ISIS supporters, their output was much greater. Another factor was the coherence of the ISIS narrative, compared to the fractured messaging of the different Muslim communities opposing them in the Middle East (and sometimes opposing each other as well).

The West Point analysis remains the most compelling. Fighting ISIS propaganda on social media has been difficult and reactive. Inflicting military defeat after military defeat on the group has returned the initiative to the United States, the Kurds, and the Iraqi government. And it is having an impact.