In Desperate Push to Save Dying Obamacare, President Wants to Bail Out Insurers 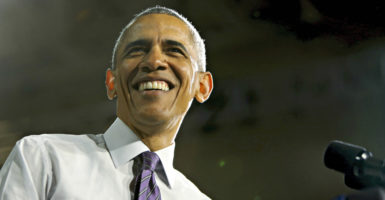 The death knell for Obamacare has been rung. President Barack Obama’s own Department of Health and Human Services confirmed this week that Americans will experience double-digit premium hikes on their health care plans beginning Nov. 1. In fact, the average increase will be 25 percent.

And while costs are going up, choice is going down: 1 out of every 5 Americans will have only one health insurer to choose from. More costs, less choice—so much for the “affordable” part of the Affordable Care Act.

No doubt about it: Obamacare is dying. But don’t count on it going gently into that good night. Instead, count the billions of dollars Obamacare is trying to rob from the American taxpayer on its way to the grave.

As health policy expert Robert Moffit of The Heritage Foundation explained in a recent commentary, Obamacare is “like a patient suffering from multi-organ failure [and] … central planning is the disease.”

But instead of pulling the plug, Obama and the insurance companies want to put Obamacare on a costly life-support line of cash, all on the taxpayer’s dime.

One symptom of the central planning disease, and indicators of Obamacare’s death spiral, is that the insurance companies haven’t made money by offering qualified health plans on the Obamacare exchanges.

Now, the Obama administration is signaling it wants to find any way it can to funnel as much as $170 billion of taxpayer money to the insurance companies, in hopes of keeping the law alive.

In other words, the administration wants to bail out insurance companies in order to bail out Obamacare.

So what exactly are these risk mitigation provisions, and how might they result in a taxpayer-funded bailout? If you’re in a hurry, you can watch this 2-minute video from The Daily Signal’s Melissa Quinn.

Got some more time? Read this detailed memo from Heritage Action for America, titled “How Congress Can Stop the Impending Obamacare Bailouts.”

But for situational awareness, the main three risk mitigation programs are called 1) cost-sharing subsidies, 2) the traditional reinsurance program, and 3) the risk corridors program.

Cost-sharing subsidies. They required insurers to artificially reduce deductibles and copays for low-income Obamacare enrollees. The administration was caught making illegal payments to the insurers to compensate for the discounts, essentially shelling out billions of dollars that weren’t authorized by Congress.

Thankfully for your wallet, a federal judge has put a pause on any more payments under this program.

The reinsurance program. It was a new tax on employer-provided health insurance, collected to create a pot of money to redistribute to insurance companies that lost profits from covering high-risk individuals. However, under this section of Obamacare, the Department of Health and Human Services also was required to make $5 billion in deposits into the Treasury and back to the taxpayers.

Want to guess how much HHS officials have paid so far? Zero. Why? Because they have broken the law by prioritizing payments to the insurance companies.

Which is why Rep. Mark Walker, R-N.C., and Sen. Ben Sasse, R-Neb., have introduced the Taxpayers Before Insurers Act to force HHS to pay the American people back the $5 billion owed.

Recently, the national Blue Cross and Blue Shield Association has been aggressively lobbying Congress to ignore the Obama administration’s illegal diversion of tax dollars into the pockets of—you guessed it—health insurers. … To be sure, it is the Obama administration, and not the insurers, who perpetrated this heist. But for the Blue Cross and Blue Shield Association to now lobby Congress to keep getting the money puts them in the unseemly (to say the least) position of the guy caught with stolen merchandise demanding that he be allowed to keep his ill-gotten goods because he wasn’t the one who originally stole them.

The problem is that we’ve seen much higher losses than profits. So the insurance companies that feel stiffed have sued the Obama administration for the difference.

Sadly, the administration seems only too willing to find a way to get the insurers the money they want. Even if it means paying them through the legally questionable method of settling the lawsuits and making payments out of the “Judgment Fund”—something the nonpartisan Congressional Research Service says the administration doesn’t have the authority to do.

But when has lack of authority ever stopped Obama before? Especially when it comes to the law that bears his name.

That’s the bad news. The bailouts are coming and Congress must act to stop them. The good news is that, unsurprisingly, the American people really don’t like the government’s giving their money to insurance companies in an effort to prop up Obamacare.

According to market research conducted by American Perceptions Initiative, which is affiliated with The Heritage Foundation, the vast majority of Americans strongly opposes using taxpayer dollars to bail out Obamacare.

Fully 87 percent of those surveyed agreed when asked whether they agreed or disagreed with this statement: “If private insurance companies lose money selling health insurance under the Obamacare program, taxpayers should not have to bail them out to cover their losses.”

I repeat: 87 percent. That’s what’s known as a mandate. Which means members of Congress and their staff can have complete confidence that Americans support action to stop the impending bailouts.

Or, put another way, if congressional Republican leadership is looking for a unifying issue after the election, it isn’t going to be passing a new internet sales tax or a massive omnibus spending package (like last year). Stopping illegal payments to insurance companies would be a unifying issue.

What’s more, the nonpartisan Government Accountability Office and Congressional Research Service also have thrown flags on the Obama administration’s play of paying insurers at the expense of taxpayers. Both found that the payments under the reinsurance program are illegal—just like they found using the Judgment Fund to make risk corridor payments would be illegal.

So when it comes to the legality of bailing out Obamacare, the Obama administration is 0-3 against a federal judge and two of the government’s own watchdog agencies.

For Congress, the choice couldn’t be clearer: Protect Obamacare or protect the American people.

The only question left to answer is who Congress will side with. The rule of law and its constituents? Or the insurance companies and the president?

As brutal Obamacare premium hikes hit families again in less than a week, and we head into the dangerous waters of a lame-duck session of Congress after the election, it’s as good of time as any to remind Congress that the American people don’t plan on going gently into the night either.

Especially not while their tax dollars are at risk of being used to bail out Obamacare.