How Regulatory Reform Boosts the Economy 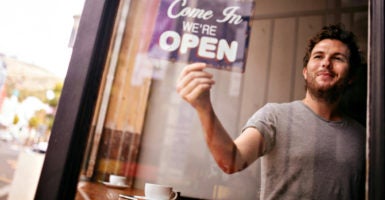 Michael Arango is a member of the Young Leaders Program at The Heritage Foundation.

How quickly does deregulation lead to economic growth? Most economists agree that less-regulated industries create more output and employ more people in the long run. New evidence shows, however, that some benefits of regulatory reform are immediate.

In a recent study, economists Peter Gal and Alexander Hijzen quantified the short-term impacts of pro-market reforms on existing companies while taking into account economic conditions, industry structure, and characteristics of a given company.

Gal and Hijzen linked a measure of industry regulation across 18 countries to detailed, company-specific data from the London-based Bureau van Dijk, which specializes in information about private companies.

By selecting companies from a variety of regulated industries and product markets, the authors built a sample with diverse market structures and degrees of regulation. They measured the impact of reforms by estimating the companies’ employment, capital, and output responses to changes in market policies.

They found progressively positive changes in all three as time passed. Capital investment and output grew almost immediately after reforms, but the effect on employment was not evident until two years later.

In each industry, regulatory reforms looked different. In retail, for example, reforms included “easing the restrictions on zoning and opening up additional plants.” In the professional services industry, reforms increased competition by reducing fees and allowing easier entry into the market.

Gal and Hijzen also were able to show that reforms work differently in different market structures.

For example, large retailers experienced a greater benefit from reforms than small ones did. Conversely, reforms in telecommunications, which typically reduced barriers to entry and ended government-supported monopolies, benefited small companies more than large ones.

The authors also establish that companies with low levels of debt were better positioned to take advantage of deregulation rapidly. They interpret this finding as a convincing argument for enacting regulatory reforms in product markets and financial markets simultaneously.

Policymakers looking for ways to boost economic growth in the U.S. should put deregulation front and center, even if they primarily are concerned with achieving short-term gains.

In a 2015 report, The Heritage Foundation reviewed 12 policy areas where regulations cost consumers heavily. Gal and Hijzen’s research suggests that regulatory reforms in those 12 policy areas would lead not only to lower prices, but to higher growth and employment.