AT&T and Time Warner Make a Bet on Innovation, but Regulators May Get in the Way 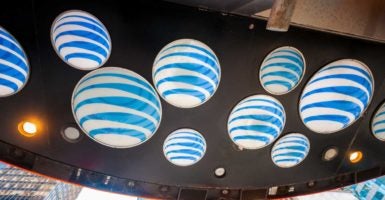 The AT&T-Time Warner merger is causing some lawmakers to consider shutting down the deal. (Photo: Richard B. Levine /Newscom)

Two of America’s best-known companies have announced they will be merging, causing consternation on Capitol Hill and calls to block the deal. But lawmakers—and regulators—could hurt rather than help consumers if they leap in to stop the transaction.

AT&T Inc.—a company that dominated telephone service in the United States for nearly a century—and Time Warner Inc.—owner of some of the most recognizable television content in the world—announced on Saturday that they plan to merge.

Despite the frosty political reaction, the proposed merger would not threaten competition, and could provide substantial benefits to consumers. Crucially, AT&T and Time Warner do not compete with each other.

AT&T operates distribution networks that deliver content to consumers—ranging from broadband internet service to digital television service to wireless devices, but offers no content of its own.

Conversely, Time Warner provides content—through providers ranging from Warner Bros. to CNN to HBO—but owns no distribution networks. (Time Warner Cable, despite its name, has been independent of Time Warner since 2009). In economic terms, AT&T and Time Warner are in a “vertical,” or supplier-customer, relationship, rather than competitors with each other.

There are, of course, situations in which firms in vertical relationships can engage in anti-competitive behavior. For example, a firm could exclude its content from being transmitted over competing distribution networks, or it might refuse to carry the content of others who seek to use its network.

Such tactics, however, can only be successful under very limited conditions. Most importantly, the excluding firm typically must have a near monopoly in the marketplace. Without such power, attempts at exclusion would simply cause potential customers to shift to competing services, at a cost to the excluding firm.

AT&T and Time Warner are constrained in just this way. AT&T has strong rivals in every aspect of its business, starting with market heavyweights Comcast Corp. and Verizon Communications Inc. Time Warner faces a highly competitive market for television and motion picture content.

Rather than present a danger to consumers, the AT&T-Time Warner deal could benefit them. AT&T CEO Randall Stephenson argues that the merged company would be able to compete more effectively with today’s cable companies, as well as develop innovative wireless video offerings that Stephenson sees consumers are demanding.

This, of course, does not mean the merger will necessarily be a success in the marketplace. The media battlefield is littered with the debris of similar highly touted deals that did not pan out.

Most famously, Time Warner’s own merger with AOL in 2000 still echoes in boardrooms and business school classrooms as a case study in failure. While the firm’s current management says this time will be different, shareholders aren’t so sure, as both firms’ stock prices dropped in the days after the deal was closed.

Moreover, despite popular rhetoric to the contrary, there has been no general trend toward mergers in the telecom and media marketplaces.

In fact, corporate divorces have been the more common strategy for firms in recent years, with PayPal and eBay Inc.’s split, and Hewlett-Packard Co.’s division into two firms leading the list. At Time Warner, divestitures have included not just Time Warner Cable, but AOL and even Time magazine. Claims that the media world is heading toward ever more concentration are misplaced: The marketplace as a whole is balanced, healthy, and self-correcting.

Finally, and significantly, even though the proposed union of AT&T and Time Warner is not guaranteed to benefit shareholders or consumers, that is no reason for the government to block it. Absent a strong showing of likely harm to the competitive process (which does not appear to be the case here), the government has no business interfering in corporate acquisitions.

Market forces should be allowed to sort out the welfare-enhancing transactional sheep from the unprofitable goats. Shareholders are in a position to “vote with their feet” and reward or punish a merged company, based on information generated in the marketplace.

As Nobel laureate in economics Friedrich Hayek famously pointed out, market transactors are better placed and better incentivized than bureaucrats to uncover and apply the information needed to yield an efficient allocation of resources.

In short, government meddling in mergers in the absence of likely market failure (and of reason to believe that the government’s actions will yield results superior to those of an imperfect market) is a recipe for a diminution in—not an improvement in—consumer welfare.

Furthermore, by arbitrarily intervening in proposed mergers that are not anti-competitive, government disincentivizes firms from acting boldly to seek out new opportunities to create wealth and enhance the welfare of consumers.

What’s worse, the knowledge that government may intervene in mergers without regard to their likely competitive effects will prompt wasteful expenditures by special interests opposing particular transactions, causing a further diminution in economic welfare.

AT&T’s purchase of Time Warner now heads to the Justice Department for review, a process that is expected to take a year or more. (Since Time Warner need not transfer broadcast licenses as part of the sale, the Federal Communications Commission may not be involved).

How the antitrust authorities handle this issue will be a test of the attitude of the new administration—regardless of who is president—toward dynamic markets. Hopefully, the answer will provide a green light for growth and innovation rather than delay and obstruction.