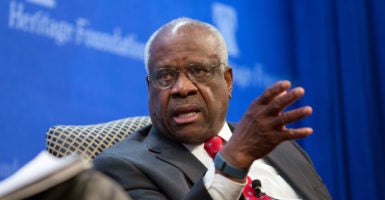 "You simply try to live up to the oath you took to show fidelity to the Constitution," Supreme Court Justice Clarence Thomas says in a "conversation" Wednesday evening at The Heritage Foundation. (Photo: Willis Bretz for The Daily Signal)

It is important for the Supreme Court not only to base its decisions on the Constitution but to issue opinions that address the questions of everyday Americans, a relaxed Clarence Thomas said Wednesday night as an honored guest speaker at The Heritage Foundation.

In a deep, resonant voice, Thomas talked early in the hourlong program about the wisdom of writing opinions in plain language, of making the Constitution “accessible.”

“I think we hide it from them when we write in language that is inaccessible,” Thomas said. “We owe it to people to present to them their Constitution in a way they can understand it, to enfranchise them.”

Supreme Court justices, he said, are “obligated to work with” what is in the Constitution, and owe Americans a clear explanation of their decisions based on it.

Thomas, who drew an early laugh by saying he is “not a navel-gazer,”  is the ninth eminent jurist to be asked to deliver the think tank’s Joseph Story Distinguished Lecture, and the first to do so in a conversational format rather than in formal remarks.

The annual lecture is named for Story, the celebrated advocate of judicial restraint who served 33 years on the Supreme Court following his appointment by President James Madison.

The two men sat on a stage before an audience of 200 guests, including about 30 of Thomas’ former law clerks, in the think tank’s Allison Auditorium. Recalling his long association with Justice Antonin Scalia, the fellow staunch conservative and “originalist” justice who died unexpectedly in February, Thomas characterized him as “pretty aggressive on the Fourth Amendment.” In one opinion, he said, Scalia referred to Thomas’ own view as “a liberty-destroying cocktail.”

At a later meal, he said, Scalia hesitated over what alcoholic beverage to order. Thomas broke up his friend by suggesting he have “a liberty-destroying cocktail.”

The previous leader of the legal center at Heritage that bears his name, Meese hailed Thomas as “one of the clearest writers we have ever had on the Supreme Court.”

Thomas returned the compliment, referring to Meese’s grace under pressure as counsellor to Reagan and, later, as attorney general.

Thomas, the second black justice to sit on the court, laughed heartily at times. Once was while retelling the story of being approached—during one of his annual trips to Gettysburg with law clerks—by a man who asked him to sign one of his opinions.

Here are some of Thomas’ other observations and one-liners during the conversation, the entirety of which may be found on the accompanying video:

1) On any particular decisions that he recalls with pride: “I don’t think about them when I’m done.”

2) On the process of writing opinions in cases: “The ones where I’m not sure are probably the ones I agonize over the most. … You [also] agonize over it if it’s a technical opinion.”

3) On trying to get other justices to see it his way: “I really don’t spend a lot of time on that. … You don’t change your underlying view or underlying principle. … When I write separately,  I try to be thoughtful.”

4) On his friendship with Scalia: “I didn’t go to the Kennedy Center to see operas with him. I told him I like opera, I just don’t want to be around the people who like opera.”

5) On his refusal to go hunting with Scalia: “No good comes of being in the woods.”

6) On their working relationship: “We trusted each other. … We almost never talked about cases before we’d vote. It was very rare.”

7) On improving the judicial confirmation process: “There’s always hope, but this city is broken in some ways. I’ve been here most of my life now, and I think we’ve become very comfortable with not thinking things through and debating them”—and instead trying to “annihilate” the other side.

“We’re destroying our institutions, and we’re undermining them,” he added.

8) On the loss of public confidence in the presidency, Congress, and even the Supreme Court because of politics: “What have we done to gain their confidence? I don’t think people owe us, reflexively, confidence. … You simply try to live up to the oath you took … to show fidelity to the Constitution.”

9) On his belief that the Declaration of Independence informs the Constitution and helps explain it: The concept of ordered liberty, he said, “starts in the declaration.”

10) On his tendency not to be intimidated by “stare decisis,” the legal principle of upholding precedent: “Like that is supposed to stop you, like the boogeyman or something.” He added, to applause: “I think the Constitution is the ultimate stare decisis.”

11) On the criticism he attracts for this approach: “Stare decisis I care about, criticism I don’t.”

13) On Obamacare, just in passing and prompting laughter: “The Affordable Care Act seems like something of a misnomer, given what’s been going on.”

14) On the importance of the court’s duty to provide administrative review of the actions of government agencies: “When we don’t review things, we abdicate our responsibility. As a constitutional matter, we are obligated to be more exacting in our review.”

15) On whether he reads every amicus brief: “No.” He added that he does read “credible ones,” whether from “the ACLU” or federal or state government—but not necessarily one from, say, “Law Professors for a Better World, that sort of just one-off kind of group.”

He did recall one brief, from “Electrical Engineers Supporting Neither Party” that he said explained “the grid” to the justices in a way the parties to the case failed to do.

“If you can look at that [brief] and say this is an honest broker … you’ll read their next brief.”

16) On seeing the nation with his wife, Ginni, in their RV:

“This, first of all, is a wonderful country and we fly over most of it. … [Travel by RV] has shown me a part of the country you wouldn’t normally see.”

17) On whether many Americans recognize him in these travels: “Most people don’t care.”

The Heritage event’s namesake, from Massachusetts, was the youngest justice to be named to the Supreme Court and is remembered by legal scholars for his authoritative “Commentaries on the Constitution.” Meese presented Thomas with Heritage’s Defender of the Constitution Award as well as with an extra copy of “Commentaries,” which he suggested Thomas could use while on the road in the RV.

“Do you mind if I share it with my colleagues?” Thomas deadpanned, to laughter and applause.