Obamacare Premiums Will Rise by Double Digits Next Year 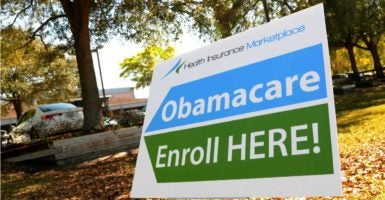 The Obama administration said insurance premiums will rise by double-digit percentages in 2017, a statement that will likely bring the debate surrounding Obamacare to the forefront in the final days of the 2016 election.

Premiums will increase at an average of 25 percent across the 39 states serviced by the online marketplace HealthCare.gov, according to the Obama administration. Even worse, around 20 percent of consumers, or 1 in 5, will have only one insurer to choose from in the marketplace.

This year’s expected increase is triple the size of 2016, and will have a direct effect on 16 percent of consumers who are not protected by subsidies, The Hill reports. Some 5 to 7 million consumers are either not eligible for subsidy assistance, or they purchase health care packages outside of the exchanges, where subsidies are not available.

The remainder of consumers will likely be protected from price increases by Obamacare subsidies.

Officials from the administration note that these increases are not a true reflection of what consumers will end up paying, and furthermore say consumers who are willing to go for a lesser plan will still be able to find a bargain on the exchanges.

The administration made its statement on the same day the Kaiser Family Foundation released its findings on the 2017 premium increases. The Kaiser Family Foundation found that premium increases will rise in 2017 more than any other year of Obamacare. The increases are due to a combination of factors, including “substantial losses experienced by many insurers in this market and the phasing out of the ACA’s [Affordable Care Act] reinsurance program.”

For a 40-year-old, nonsmoking individual, the report finds that premiums ranged from “$186 per month in Albuquerque, NM, to $719 in Anchorage, Alaska, before accounting for the tax credit that most enrollees in this market receive.” That same person could see their plan rise 145 percent in Phoenix, Arizona, and 71 percent in Birmingham, Alabama, and Oklahoma City, Oklahoma.

This is not great news for the already struggling health care legislation. Obamacare is in the midst of a death spiral: 17 co-ops have failed, the Tennessee health commissioner says the health care exchanges in the state are “very near collapse,” insurance companies in North Carolina have become a “financial sinkhole,” and few health experts have positive things to say about the future of the legislation.

The total number of insurers participating on the Obamacare exchanges is likely to drop from 232 this year to 167 in 2017. That is a loss of 28 percent in just 12 months.