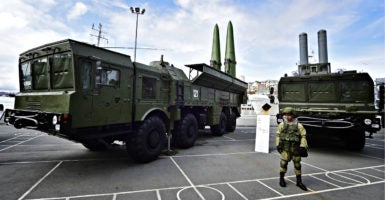 William Samuel is a member of The Heritage Foundation's Young Leaders Program.

In an extremely worrying development for NATO, Russia earlier this month deployed several nuclear-capable Iskander mobile ballistic missile launchers in the Kaliningrad region. The location is a small Russian enclave on the Baltic between Poland and Lithuania that is home to Russia’s Baltic Fleet and several major military installations.

The deployment is widely seen as a countermove to NATO’s announcement that it will deploy more troops and missile defense systems to Poland and the Baltics, which Russia views as a direct threat to its security.

With a range of more than 300 miles, Iskander missiles are capable of striking Warsaw, Poland; Vilnius, Lithuania; and Riga, Latvia. Newer extended range variants may be capable of reaching Berlin.

More worrisome, the Iskander is a “dual-capability weapon” able to fire a variety of conventional payloads or tactical nuclear weapons. When equipped with nukes, its range of 300-plus miles puts it in violation of the 1987 Intermediate-Range Nuclear Forces Treaty, a distinction that doesn’t appear to concern Russia.

It isn’t clear whether these units are nuclear equipped, but given past Russian threats to target countries hosting missile defense systems with nuclear weapons, the possibility can’t be ruled out.

Moscow said the deployment is temporary, part of a drill, and “not exceptional.” Admittedly, this is not the first time Russia has deployed Iskanders to Kaliningrad. Still, this deployment appears to be larger than prior ones, and there is concern that Russia plans to eventually base the missile launchers in the enclave full time.

Lt. Gen Riho Terras, chief of staff of the Estonian Defense Forces, views the Iskander as part of Russia’s plan “to bring the Baltic Sea and the passages leading to it more and more under its control, and to control it much as it does the Black Sea.”

This is hardly an idle concern. The Kaliningrad enclave long has been central to Russia’s anti-access area denial operations, known as A2/AD, in the Eastern Baltic, and the Iskander is accurate enough to target large military formations as well as bases and cities.

NATO members have criticized the deployment strongly. It is not clear, however, how the alliance plans to counter the missiles—or if it can do so without inflaming tensions further.