How to Talk About Defense Spending and ‘Rebuilding the Military’ 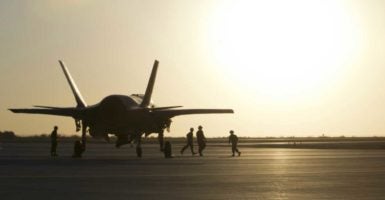 Defense spending can be a tricky issue to talk about, but there are plenty of ways to find common ground. (Photo: Cpl. AaronJames Vinculado/UPI/Newscom)

Hardly a day passes without one (or seven) news reports highlighting conflicts abroad. What this reality means for America and our safety under the current budget isn’t great.

As violence has increased, defense spending has decreased by about 25 percent since 2011. And now there is a legitimate question about whether slashing the budget has weakened our military as outlined in The Heritage Foundation’s 2016 Index of U.S. Military Strength.

Most signs point to yes, just in time for a changing of the guard in the District of Columbia. This will be a major topic of discussion in the coming months as it involves our safety, the safety of our men and women in uniform, and a (potential) increase in cash money as a line item in an already bloated budget.

Here’s how to talk defense spending with someone who thinks the current level is more than sufficient.

Good news, the common ground is pretty easy to find. We can all agree that keeping America safe is priority No. 1. But also, it’d be great to equip our men and women in uniform with the resources they need to get the job done. Doing so will only better ensure our protection at home and theirs in combat.

Sure, we can have a discussion about the rightness or wrongness of our involvement overseas, but that’s for another time. Once the decision has been made to deploy our men and women, it’s important they are properly trained and equipped.

Also, most people realize that the growing threats abroad are a problem. Mention Russia, North Korea, China, and most countries in the Middle East that are struggling with terrorism, and you’ll find agreement that these are scary times.

Though it’s important to establish common ground, the examples and statistics you provide will make or break your point. The naysayers will argue for a stripped-down military that reflects an isolationist perspective or that more funds be spent at home (domestic spending). The examples you choose should combat (pun intended) both perspectives.

To speak against the “we should be spending more on domestic issues” argument, first acknowledge that it’s a reasonable discussion to have. But then consider that the men and women who defend us every day shouldn’t be ill-equipped either.

The unpreparedness of our military as a result of cuts to the budget are neatly outlined in this Daily Signal article. All five points are worth citing when making your case for an increase in defense spending, but here’s a preview:

1. “The Air Force is short 4,000 maintainers and more than 700 pilots today.” It doesn’t matter how many planes the Air Force has, or how modern they may be, if they can’t fly. Without qualified mechanics to maintain the aircraft and properly train pilots to fly them, the Air Force will struggle to accomplish its mission.

2. “In 2015 the Navy had a backlog of 11 planes in depot, next year in [20]17 they are going to have a backlog of 278.” Readiness levels for the entire fleet have fallen as the Navy’s maintenance crews are being asked to work longer hours with less funding. More planes in maintenance mean fewer are available to meet mission requirements.

3. “Marine Corps aviation requires on average 10 hours of flight time a month and they are getting about four.” Like any skill, practice is essential. Pilots without practice make more mistakes, which become deadly when flying complex aircraft, especially when in combat. The lives of Marines are at greater risk because of these funding cuts.

And what about the Army? This Daily Signal article covers it, but one shocking statistic to remember: “Years of budget cuts have rapidly shrunk the Army to a size unseen since before World War II.”

There is an inverse relationship between the rise in violence and the readiness of our military. Someone might try to argue that America is involved in wars it shouldn’t be, that “we can’t be the world’s policeman.” But again, pivot back to safety as our No. 1 concern. With increased violence, it seems foolish to continue weakening our defenses.

The obvious choice is to drop “safety” throughout your conversation. It’s hard to deny anyone’s wish to be kept safe and it brings you back to that common ground established at the outset.

And rather than an “increase in defense spending,” talk about “rebuilding our military” for the reasons outlined above. Money is a sensitive topic, and you’ll cite great examples and statistics to make your case for an increase in money spent, but refrain from explicitly talking about spending more money.

The bottom line? You can’t put a price on safety.

Defense spending is a tricky topic, but you’re not unprepared to address it. Have this discussion knowing that common ground will disarm, your examples will illustrate, and the words you use will help seal the deal.