Controversial Proposal for Nurses Could Expand Access to Care for Veterans 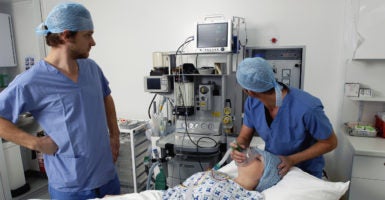 But a proposed rule from the Department of Veterans Affairs to allow nurse practitioners, nurse midwives, and clinical nurse specialists to practice independently of physicians has brought the debate to the national spotlight and sparked an unprecedented response from the public.

“To use advanced practice registered nurses to their full authority, it improves access and enables the delivery of high-quality care, and that’s good for everybody,” Marla Weston, CEO of the American Nurses Association, told The Daily Signal. “It’s good for the health care system, and it’s good for people in all sorts of ways.”

Advanced practice nurses have master’s, post-master’s, or doctoral degrees and have to adhere to scope of practice regulations, which are parameters set by state boards, legislatures, and the government that dictate the services providers can give to which patients and in what settings.

In Arizona, for example, nurse anesthetists cannot provide anesthetics unless they’re “under the direction of and in the presence of a physician or surgeon.”

Groups like the American Nurses Association and the American Association of Nurse Anesthetists have long called on state lawmakers to expand the scope of practice for registered nurses or grant full practice authority.

That year, the Institute of Medicine, after launching a two-year initiative with the Robert Wood Johnson Foundation in 2008, released a report examining the future of the nursing profession. Included in that report was an analysis of the legal barriers in place across many states that make it difficult for advanced practice registered nurses to use the full scope of their training and education.

The report recommended state policymakers lift some of these constraints to expand the scope of practice for advanced registered nurses, which the Institute of Medicine said would improve care for patients.

“Now is the time to eliminate the outdated regulations and organizational and cultural barriers that limit the ability of nurses to practice to the full extent of their education, training, and competence,” the Institute of Medicine concluded.

In the wake of the report, states began to act, with legislators debating laws that would allow advanced practice registered nurses like nurse practitioners and nurse anesthetists to practice independently.

Today, 21 states and the District of Columbia have granted nurse practitioners full practice authority, according to the Robert Wood Johnson Foundation.

Lawmakers in Nebraska and Maryland were the most recent to do so, passing legislation last year that allows nurse practitioners to practice independently of a physician.

And 40 states and the District of Columbia don’t have a physician supervision requirement for nurse anesthetists on the books, according to the American Association of Nurse Anesthetists.

Heading into 2017, lawmakers in Tennessee and Arizona are gearing up to address the scope of practice for advanced practice registered nurses.

A coalition of these nurses in Arizona lobbied the state Legislature last year, urging them to expand nurses’ authority and change language requiring nurse anesthetists to provide anesthetics under “the direction of and in the presence of a physician or surgeon.”

But after medical associations worked to stop the original bill, it was ultimately defeated.

Ali Baghai, a nurse anesthetist working in Tempe, Arizona, and the former president of the Arizona Association of Nurse Anesthetists, said advanced practice nurses plan to take a more piecemeal approach to legislation next year.

“APRNs and [nurse anesthetists] provide high-quality, safe, and cost-effective health care,” Baghai told The Daily Signal. “It’s been proven for decades, and we just want legislation that lets us do our jobs and take care of patients.”

Though advanced practice nurses have seen success at the state level in expanding the scope of practice for nurse practitioners, nurse anesthetists, nurse midwives, and clinical nurse specialists, their efforts have not been met without resistance from medical associations and physician advocates.

And in no place is that split between the nursing community and physicians more evident than at the VA, where a proposed rule to grant full practice authority to advanced practice nurses led to one of the largest responses to a federal regulation, with more than 178,000 comments submitted to the government via the regulations.gov website.

“The best way to honor our commitment to our veterans is to modernize the VA and eliminate unnecessary regulations that only impede our ability to provide them quality care,” Michael Smith, a former clinical specialist in the Army, wrote in a comment to the VA supporting the proposal. “Lifting the restrictions on nurse practitioners is a great place to start.”

“I’m a veteran: I put my life on the line in service to my country, and I believe that I deserve quality health care,” Sean Malin wrote in a separate comment. “I oppose any mandate that would force the best trained physicians out of the operating room.”

The VA announced its proposal in May, and the rule would extend to nurse practitioners, nurse midwives, and clinical nurse specialists while they’re employed by the VA.

A spokeswoman for the VA said officials are hoping to finalize the rule by January.

And supporters of the proposal like the American Nurses Association and American Association of Nurse Anesthetists agree.

Before the American Nurses Association, Weston worked at the Department of Veterans Affairs in the Veterans Health Administration in both the Office of Nursing Services and the Workforce Management and Consulting Office.

In addition to increasing veterans’ access to care, expanding nurses’ authority would put the VA in line with other government entities that have already done so, supporters said. Currently, advanced practice nurses serving in the armed forces and working with the Indian Health Service can practice independently.

“It doesn’t make sense to say, ‘OK, it’s alright for the military, all branches. It’s alright for the Indian Health Service to do this. But in the VA? No,’” Cheryl Nimmo, president of the American Association of Nurse Anesthetists, told The Daily Signal.

“Does the quality change? No,” she continued. “If a [certified registered nurse anesthetist] decides they want to retire from active duty military and work in the VA, suddenly they’re not as safe as they were for their first 20 years? It doesn’t make any sense.”

Nimmo, who served in the Army Reserve for 10 years, and the American Association of Nurse Anesthetists are among a long list of organizations like the AARP and the Federal Trade Commission, Republican and Democrat members of Congress, and military groups supporting the Department of Veterans Affairs’ proposal.

Those supporters say that allowing advanced practice nurses to work independently would alleviate the issues plaguing the VA, like shortages of doctors and long wait times for veterans to see physicians.

“This is a sensible, productive, quality way to fix the problem,” Nimmo said.

But on the other side of the proposal are large doctors’ groups lobbying hard against it. Those groups believe the rule is “unprecedented” and say expanding nurses’ authority would impact the standard of care.

“We feel this proposal will significantly undermine the delivery of care within the VA,” Dr. Stephen Permut, board chair of the American Medical Association, said in a statement in May. “With over 10,000 hours of education and training, physicians bring tremendous value to the health care team.”

Like the American Medical Association, the American Society of Anesthesiologists was vocal in opposing the VA’s proposal, calling it “dangerous.”

“Americans understand that it would be wrong to lower the standard of care provided to these men and women who have bravely served our country,” Dr. Daniel Cole, the group’s president, said in July. “We expect the VA will listen to the comments of veterans, their families and the American public who care about the quality of health care in the VA system and abandon this dangerous proposal that runs counter to the VA’s own strategy to deliver high-quality, Veteran-centered care.”

Despite the concerns from physician groups, nurses with advanced training point to their level of education and experience as arguments in favor of proposals to expand their scope of practice.

While physicians and physician groups have said that there is a substantial difference in the levels of education for doctors and advanced practice nurses, both Nimmo and Weston disagreed.

“The standards are very high, and we study the exact same things with the exact same textbooks,” Nimmo said specifically of nurse anesthetists. “Sometimes, they even take the same classes together.”

Over the last few years, research has emerged suggesting that expanding the scope of practice for advanced practice nurses can help expand access to underserved populations, especially those living in rural communities.

“The reality is the research is on our side,” Baghai said. “We provide high-quality, safe care.”

According to the National Conference of State Legislatures, which tracks scope of practice, 11 percent of the country’s physicians work in rural areas, but 20 percent of the population lives there.

Additionally, no studies suggest that advanced practice nurses deliver care that is of a lesser quality or less safe than that delivered by physicians, according to the Institute of Medicine.

“We are able to provide this much-needed service to Americans,” Nimmo said. “It has been historically the norm that advanced practice registered nurses have taken care of patients in rural communities. It increases access for those people.”

“They might not have the time or the wherewithal to get themselves to an urban area for care,” she continued. “This provides the care to them right in their own neighborhood.”

Many groups supportive of expanding the scope of practice point to the floods of Americans—more than 17 million more, according to the National Conference of State Legislatures—that have become newly insured since Obamacare’s implementation as another reason advanced practice registered nurses should be able to work independently of physicians.

While more people are accessing the health care system through primary care providers instead of emergency rooms, there hasn’t been an increase in the number of physicians, the National Conference of State Legislatures found.

“One of the ways the health care system would work the best is to have advanced practice nurses function at full practice authority in all states,” she told The Daily Signal. “It improves access to high-quality health care.”