Socialist, Refugee Advocate to Run UN for Next 5 Years 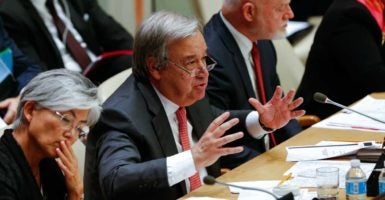 United Nations Secretary-General-designate Antonio Guterres talks during a meeting of the U.N. General Assembly at the U.N. headquarters on Oct. 19 in New York. (Photo: Xinhau/Li Muz/Newscom)

While it’s hardly the election to get the most attention this year, the United Nations General Assembly has confirmed a nominee with a background in socialist politics and refugee matters to be the organization’s new secretary-general.

The 193-member United Nations General Assembly approved Antonio Guterres, a socialist whom President Barack Obama called a man of “character, vision, and skills” in a statement five days before speaking with him on the phone.

Guterres replaces U.N. Secretary-General Ban Ki-moon, who served two five-year terms and is stepping down from the position on Dec. 31.

Obama said in his statement that the new secretary-general would be instrumental in dealing with “unprecedented challenges” facing the world, including the surge of millions of displaced people and climate change.

“The international community has never relied more on the United Nations than it does today,” @Potus says.

In the midst of the Syrian civil war, the refugee crisis has become front and center for most Western countries, including the United States. Guterres, 67, was prime minister of Portugal from 1995 to 2002, as head of the country’s Socialist Party. He also was the head of the U.N. High Commission for Refugees from 2005 through 2015. Both roles involved some controversy.

When addressing the U.N. General Assembly after his victory, Guterres talked about bringing relief to refugees and promoting gender equality as key priorities, but also said he would take a limited approach to his new office.

“I believe this process means that the true winner today is the credibility of the U.N. And it also made very clear to me that, as secretary-general, having been chosen by all member states, I must be at the service of them all equally and with no agenda but the one enshrined in the U.N. Charter,” Guterres said.

The bigger question might be whether the role matters, said Fred Fleitz, a former U.N. analyst for the CIA and the chief of staff for former U.N. ambassador John Bolton.

“The U.N. is more and more a nonentity,” Fleitz told The Daily Signal in a phone interview. “It’s used to justify actions, but because of the vetoes on the Security Council, there is no way to act on Syria or North Korea. I don’t know if this election matters.”

Still, Fleitz said he believes the socialist background of the new secretary-general is relevant.

“It should be concerning to have someone with that perspective for thinking along the lines of one-world government at a time when the world is moving away from that, if you look at the European Union,” Fleitz said.

In addition to leading the Socialist Party in Portugal, Guterres presided over Socialist International, a global group of 153 socialists, social democratic, and labor party leaders, from 1999 to 2005.

Guterres weathered controversy in both of his past positions, said Brett Schaefer, a senior fellow in international and regulatory affairs at The Heritage Foundation.

Guterres resigned as prime minister of Portugal when the Socialist Party took heavy losses in the 2001 local elections following an economic downturn. At the U.N., a 2010 independent Board of Auditors cited the United Nation’s refugee agency for weak financial management and oversight.

Still, Guterres was clearly the best out of a crowded field of candidates for the job, Schaefer said. Schaefer said he thinks the new U.N. chief’s socialist affiliations say something about him.

“It provides some insight into his political leanings and shows that he advocates an economy where the state is more interventionist in markets and over the lives of individuals,” Schaefer told The Daily Signal.

Schaefer anticipates that Guterres will be a strong spokesman on the refugee front, possibly using his platform to call for more Western countries to increase the number of refugees they take in.

“I’m sure he will advocate for the part of the U.N. system he knows the best, given the significant rise in refugees we’ve seen in recent years, he will do what he can to address that problem,” Schaefer said.

Ultimately, Guterres’ ability to push an agenda will be limited, since the U.N. Security Council has the ultimate authority to make major decisions, Schaefer said. That’s why Schaefer contends it would be better to focus on weeding out waste and corruption in the organization.

Guterres, a practicing Catholic, is a trained engineer and was a professor before going into politics in 1974. Guterres will take his post in January, just weeks before the inauguration of a new U.S. president.