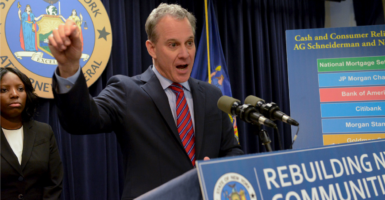 Exxon Mobil Corp. is fighting back against New York’s Democrat attorney general who is demanding decades’ worth of documents about the company’s position on global warming and climate change.

On Oct. 17, Exxon asked a federal judge in Texas, Ed Kinkeade, to stop the abusive behavior of New York Attorney General Eric Schneiderman by tossing out the subpoena that Schneiderman served on Exxon as part of a investigation of the company for supposedly lying to the public about catastrophic, man-induced climate change.

This is part of the effort of state attorneys general like Schneiderman to criminalize scientific dissent and punish heretics who question the validity of this unproven theory.

Exxon had already filed a lawsuit in federal court to stop a similar investigation being waged by Massachusetts Attorney General Maura Healey, also a Democrat. Exxon’s Oct. 17 motion asked the same federal court to allow it to amend its original complaint to add Schneiderman to its lawsuit.

Schneiderman’s subpoena demanded the production of essentially every document in the company’s possession concerning global warming or climate change for the last 40 years, including not just its internal research but any interactions with any other entities such as universities, researchers, and scientists that Schneiderman calls “aggressive climate deniers.”

Schneiderman has accused conservative groups—including The Heritage Foundation—of being part of a “dark money empire” that is supposedly directing a disinformation campaign on climate change and Exxon.

As Exxon points out in its brief, it is politics that is behind what the New York attorney general is doing, not enforcement of the law.

The brief summarizes in great detail the political motivations driving not only Schneiderman and Healey, but all of the other state attorneys general who held a press conference in March pledging themselves to use whatever means necessary to “deal with the problem of climate change” and force energy companies to support the preferred public policy on climate change of their coalition, which calls itself the Green 20.

That includes their secret, closed-door meetings and coordination with climate activists who made it explicit that their goal was to use law enforcement tools to “delegitimize” Exxon.

What is abundantly clear is that Schneiderman, Healey, and the other attorneys general who are part of the Green 20 are abusing their authority and power as governmental prosecutors to engage in a political witch hunt.

The true purpose of these investigations, according to Exxon, is to “suppress speech with which the Green 20 disagrees” on climate change. And the public statements made by Schneiderman and Healey make it clear that their “improper bias” disqualifies them from serving as the disinterested prosecutors required under the Constitution.

Interestingly, Exxon points out that the original fishing expedition engaged in by Schneiderman over its “historic climate change research” has changed. Less than a month ago, Schneiderman’s official press spokesman said that the attorney general was changing the focus of his investigation to Exxon’s estimation of its oil and gas reserves for the purposes of claiming that the company has engaged in “massive securities fraud.”

The attorney general is apparently now asserting that Exxon has overstated its reserves because he believes that “future global efforts to address climate change” will force the company “to leave enormous amounts of oil reserves in the ground.”

But, as Exxon points out, that theory conflicts not only with standard accounting procedures, but also with the regulations of the Securities and Exchange Commission.

The SEC prohibits energy companies from considering the impact of future regulations when estimating oil reserves. As Exxon says in its brief, “to the contrary, they require Exxon Mobil to calculate its proved reserves in light of ‘existing economic conditions, operating methods, and government regulations.’”

In other words, the SEC “requires Exxon Mobil to ignore Attorney General Schneiderman’s assumptions about future regulations when estimating reserves.”  The fact that the Massachusetts attorney general has now adopted the same mistaken legal theory “speaks volumes about the pretextual nature of the litigation.”

According to Exxon, the “true objectives are clear: to fish indiscriminately through Exxon Mobil’s records with the hope of finding some violation of some law that one of them might be empowered to enforce, or otherwise to harass Exxon Mobil into endorsing the Green 20’s policy views regarding how the United States should respond to climate change.”

This action to add the New York attorney general to the Texas lawsuit was the result of an order issued by Kinkeade on Oct. 13 that should fill both Schneiderman and Healey with foreboding.

Normally, a federal lawsuit filed to try to stop a state lawsuit would be dismissed under the Younger abstention rule. The Supreme Court held in Younger v. Harris in 1971 that there is a strong federal policy against federal court interference with pending state judicial proceedings.  However, one of the exceptions to that rule is a state proceeding filed in bad faith.

Kinkeade stated that Healey’s actions “causes the court concern” and presents the question of whether she is pursuing this claim “with bias or prejudgment about what the investigation of Exxon would discover.”

If the allegations about Healey are true, then her actions “may constitute bad faith” that “would preclude Younger abstention.” As a result, he ordered discovery by both parties “to aid the court in deciding” whether Healey committed bad faith or whether this lawsuit should be dismissed.

What is abundantly clear is that Schneiderman, Healey, and the other attorneys general who are part of the Green 20 are abusing their authority and power as governmental prosecutors to engage in a political witch hunt that violates basic constitutional rights of due process and most importantly, the First Amendment.

Their intention is to chill speech and silence anyone who disagrees with them about a disputed scientific theory and public policy issue that is the subject of great debate.

That is how government prosecutors operate in the Third World and in banana republics—not the United States of America.