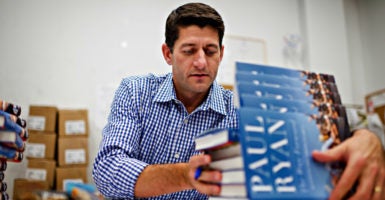 Rep. Paul Ryan, R-Wis., signs copies of his book, “The Way Forward,” on Aug. 27, 2014, in Thornton, Colorado. Before its release, the Federal Election Commission investigated a complaint about its political contents. (Photo: Tom Williams/CQ Roll Call/Newscom)

The Federal Election Commission hasn’t proposed banning books or movies, but in a 3-3 vote last month along party lines, the six-member panel left the regulatory option on the table.

It was just one of numerous ties. But FEC member Lee Goodman, a Republican, says he’s surprised cases that deal with regulating  content from a book publisher or news programming would result in split votes.

The FEC hasn’t spoken in a unanimous voice about what Goodman and others say are basic matters of free speech under the First Amendment. Rather, various commission votes open the door to applying campaign finance laws to movies, books, and other media rarely ever considered before as campaign contributions.

In the past two years, the FEC, divided equally into Democrat and Republican factions, investigated books containing partisan material (among them a book by House Speaker Paul Ryan, R-Wis.), a conspiratorial film disparaging President Barack Obama, and a Republican presidential debate on Fox News Channel.

While the presidentially appointed commission sanctioned neither Ryan’s publisher nor Fox News, it avoided granting the “press exemption” to either.

“Respect for the free press shouldn’t vary based on who is on the commission or on the content of the publication,” @FEC’s Lee Goodman says.

The exemption was designed to ensure that news organizations, which generally are corporations, cannot be accused of electioneering or making in-kind campaign contributions based on news reporting or commentary on political candidates. The law states, in part:

(B) The term ‘expenditure’ does not include—
(i) any news story, commentary, or editorial distributed through the facilities of any broadcasting station, newspaper, magazine, or other periodical publication, unless such facilities are owned or controlled by any political party, political committee, or candidate; …

The commission was preparing to vote on a routine “tech modernization” proposal, regarding rules about financial contributions made electronically. Goodman proposed an amendment to clarify that the “press exemption” includes books, movies, satellite radio, and streaming services—effectively ensuring them the same First Amendment protections that newspapers, radio, and TV networks currently enjoy.

“I don’t have the confidence that four commissioners or even three commissioners will recognize the press rights, but will rather trim the sails,” Goodman told The Daily Signal in a phone interview.

Goodman said he worries about a chilling effect—and that it ought to be a bipartisan concern.

“The commission’s respect for the free press shouldn’t vary based on who is on the commission or on the content of the publication,” he said.

Weintraub pointed out that Goodman proposed an amendment to a measure that had nothing to do with free speech.

In an email, Weintraub told The Daily Signal:

The matter before the commission that day was a proposal to make minor technological modernizations to the commission’s regulations, updating them to avoid specifying such outmoded technology as faxes and microfilm, for example.  At the meeting, Commissioner Goodman attempted to add a nongermane amendment to the proposal.

The First Amendment contains protections that are critical to free speech, a free press, and a free country. It needs no implementing regulations from the FEC.

Weintraub then referred to the Supreme Court’s 5-4 ruling, in the 2010 case Citizens United v. Federal Election Commission, that organizations have free speech rights allowing them to spend money to support or oppose political candidates.

The work we do need to do, which some of my colleagues, including Commissioner Goodman, have blocked for years, is to write rules that respond to Citizens United and the advent of super PACs. Sadly, even routine regulatory fixes have become nearly impossible to accomplish at the FEC.

This useful and almost entirely noncontroversial technological-modernization proposal has been bogged down for years. I decided to stick with the staff’s draft in the hope of getting this done without further delaying it with nongermane but substantive proposals.

Besides Goodman, FEC Chairman Matthew S. Petersen and member Caroline Hunter also are Republicans. Weintraub and Ann Ravel are Democrats, and Vice Chairman Steven Walther is an independent who caucuses with them.

In the past, the FEC frequently would vote 6-0 in many cases that dealt with the First Amendment, giving the benefit of the doubt to media. Among them was a 2002 rejection of a complaint regarding two news organizations that sponsored a candidate debate. That consensus seems to have gone away, Goodman argues.

“Anyone who studies a series of cases on books and films must come to the conclusion there is a distinct difference of opinion on the definition of the press exemption,” Goodman said. “It’s not just on film, but on press in general.”

In 2014, the FEC ruled on a complaint about Ryan’s book, “The Way Forward: Renewing the American Idea,” published before Ryan became House speaker in October 2015.

The three Republican commission members said they wanted the decision to clearly state that book publishers are exempt from campaign finance regulations, the same as news media. The Democrats disagreed.

Ultimately, the commission approved a more limited exemption to determine the book didn’t violate campaign finance laws. Still, this marked an occasion on which the FEC refused to rule out regulating books based on political content.

Goodman points to Weintraub’s words regarding this issue as reason for concern. During the commission meeting, the Democrat said:

When a group called Highway 61 Entertainment released the film “Dreams From My Real Father,” purporting that Obama’s real father was a communist, someone filed a complaint after the filmmaker mailed millions of copies to voters in swing states during the 2012 presidential race.

Again, Republican members determined the film was covered by the media exemption and Democrats determined it was not. This led to a 3-3 tie vote in April.

Seeking to narrowly define media protected by the First Amendment could be a means of targeting alternative conservative media, said Hans von Spakovsky, a senior legal fellow at The Heritage Foundation and former FEC member.

Given the 4-4 split on the Supreme Court, one FEC ruling could set up litigation to work its way through the courts, he said.

“It’s extremely dangerous. Four liberals on the court now that want to overturn Citizens United, and you have a 4-4 split,” von Spakovsky said.

Conversely, The New York Times, in an editorial last month, called the FEC an “impotent joke” and said it is “paralyzed and should be replaced by a new agency.”

Interestingly enough, the commission’s questions even surrounded whether a news organization, Fox News, could be regulated.

Mark Everson, a largely unknown candidate who ran for the 2016 Republican presidential nomination, filed an FEC complaint after he was excluded from both the cable news channel’s main debate event featuring 10 candidates and the “undercard” debate featuring seven other candidates. He did not reach the polling threshold.

Everson’s complaint focused on how Fox made a change to the second debate that accommodated more candidates but still left him out. These were the opening debates of the campaign season, held Aug. 6, 2015, in Cleveland.

In June, the FEC considered several motions on the Fox News case, none of which gained the needed four votes, so no action was taken. But in two key motions, Democrat Ravel and independent Walther each voted that Fox had violated campaign finance law.

The next motion, which failed 3-3, was to find no wrongdoing by Fox in the debate format because the news operation was protected under the press exemption.

Here’s how Ravel explained her vote against Fox to The Washington Post:

There have to be pre-established, objective criteria. Changing the standards in the last moment [as Fox did] was the subject of a complaint to the commission and we responded to it in our view, in a nonpartisan way, in a way that was consistent with the clear law, so my role in the commission is not to apply constitutional principles because I’m not on the Supreme Court. If I were, I’d be happy to do so. We’re a regulatory agency and our role is to follow the law and apply the law.

In the FEC’s statement on the Fox News case, Goodman urged a more thorough conversation about news media protections. He wrote:

Given the [FEC] Office of General Counsel’s recommendation and our colleagues’ votes in this matter, this compromise is no longer tenable. The commission’s debate regulation cannot be used to impose government restrictions on newsroom decisions and to punish, and even censor, American press organizations. We can no longer agree to avoid addressing freedom of the press. As we have been warning in matter after matter, our colleagues’ desire to use this agency’s authority to regulate and punish the press and media warrants more robust scrutiny and a civil public debate.