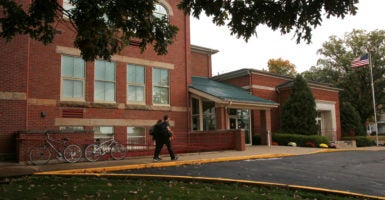 A 34-year-old student at Iowa State University is suing the school over what he calls an “unconstitutional speech code.”

The student, Robert Dunn, says the university is forcing him to compromise his First Amendment rights by complying with “overly broad and vague” anti-discrimination and harassment policies. Failing to agree to abide by the policies, he added, could result in the school placing a “hold” on his diploma and a “review” by the dean of students.

The “speech code” Dunn is referring to is a university policy titled, “Sexual Misconduct, Sexual Assault, and Sexual Harassment Involving Students.” In August, prior to the fall 2016 semester, Dunn said he received an email announcing the new training program on “the university’s nondiscrimination policies and procedures” to be completed online.

Specifically, Dunn’s lawyers argue in the lawsuit, the policy “states that ‘gossip’ about a male student’s ‘feminine dress’ could be harassment, failing to even acknowledge that students also possess First Amendment rights that might be implicated.”

“The harassment doesn’t even have to be directly at the person,” Dunn told The Daily Signal in a phone interview. “So I didn’t feel comfortable saying that I was going to sign over my First Amendment right in order to comply with campus policy.”

Dunn is being represented by lawyers at Alliance Defending Freedom, a Christian conservative nonprofit law firm that advocates for the right of people to live out their faith.

Casey Mattox, an attorney representing Dunn, said the policy at Iowa State is “one of the worst policies that we have seen in recent years.”

The fact that it would affirmatively state that First Amendment protected speech can still be deemed harassment by the university and then just give administrators the authority to decide what those circumstances are, when free speech equals harassment, it basically eliminates any kind of protection for free speech. You can’t be put in a position as a student where you have to fear that whatever you say could be deemed harassment if someone else thinks the circumstances are such.

The Daily Signal contacted Iowa State about the lawsuit. A spokesman said “we have no comment.”

This is not the first time Iowa State’s anti-discrimination and harassment policies are being challenged. In previous years, Alliance Defending Freedom says it contacted the university about “flaws in the policies.”

“The university had responded in 2014 that it would [be] reviewing the policies over a one-year period. The recent revisions, however, failed to address the obvious constitutional defects,” Alliance Defending Freedom said in a press release.

Dunn said on campus, he has the support of both students and faculty.

“On our campus, there’s been a lot of chill and fear about speaking out. It’s not just students, but faculty, and I think a lot of people are wishing that they could be able to speak their mind and be able to say something without walking on eggshells when the person next to them could claim to be offended,” he said.

Dunn added that he thinks the issue “cuts across ideological spectrums.”

“I think a lot of commonsense liberals are starting to wake up and say, ‘Hey, this affects us too.’”

“Whatever backlash there is,” he added, “I think the positive aspects will eventually play out. Because I definitely see a lot of liberals say if we value our free speech, we have to value free speech of those we diametrically disagree with.”