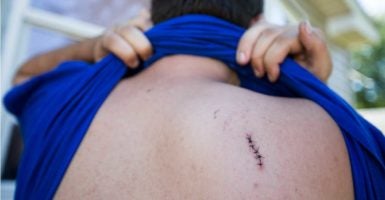 Isaiah Mordal was stabbed in his right shoulder blade by the attacker at Crossroads Center mall in St. Cloud, Minnesota. (Photo: Leila Navidi/TNS/Newscom)

The Heritage Foundation is adding to our terror plot timeline as the past several weeks have seen two successful attacks and one plot foiled by law enforcement. This brings the total number Islamist terror plots and attacks against the U.S. homeland since 9/11 to 92.

On Sept. 17, Dahir Ahmed Adan entered a mall in St. Cloud, Minnesota, dressed as a security guard and began stabbing individuals before an off-duty copy shot and killed him. According to police, Adan asked at least one person if they were a Muslim before attacking them and made statements regarding Allah during the attack. Ten were injured in the stabbing spree, but thankfully none were killed or suffered grave injuries.

Adan, 20, reportedly came to the U.S. when he was 3 months old as a refugee with his parents from Somalia. The Islamic State’s, or ISIS, news organization, Amaq, claimed that Adan was one of its supporters.

While the FBI has no yet finished its investigation into Adan’s motives, FBI Director James Comey agreed that Adan appeared to have been motivated “by some sort of inspiration from radical Islamic groups.” Together with police reports regarding his actions and statements during the attack, it is clear enough that this was the 90th Islamist terror plot and the 12th successful attack since 9/11.

On the morning of Sept. 17, a pipe bomb exploded in Seaside Park, New Jersey, along the route for a U.S. Marine Corps charity run. The bomb was believed to be on a timer and, due to delays in starting the run, exploded before anyone was in the area.

At around 8:30 p.m. on the same day, a high explosive pressure cooker bomb exploded in Manhattan, leaving at least 31 individuals injured and widespread damage to nearby buildings. Other bombs were located several blocks away in Manhattan as well as at a train station in New Jersey. The investigation led to Rahami being subdued after shooting and injuring two police officers before being shot himself.

The subsequent investigation uncovered Rahami’s journal in which he praised other terrorists such as Anwar al-Awlaki, Nidal Hasan, and Osama bin Laden. He also believed he was following the orders of other terrorist leaders “that if travel [to Syria] is infeasible, to attack nonbelievers where they live.”

The investigation also uncovered Islamist terrorist media on social media accounts believed to belong to Rahami. Rahami has been charged with multiple crimes, including using and attempting to use a weapon of mass destruction and bombing charges, with additional charges possible.

Rahami reportedly came to the U.S. from Afghanistan in 1995 after his father claimed asylum in the U.S. This attack is the 91st Islamist plot against the U.S. homeland since 9/11 and the 13th successful attack.

On Oct. 1, Nelash Mohamed Das was charged with attempted material support to ISIS.

A Bangladeshi citizen and legal U.S. resident in Maryland after moving to America at the age of four, Das had long shown support for the ISIS organization via Twitter. He told an FBI confidential source of his desire to kill a U.S. military member whose name he had acquired from an online ISIS hit-list.

This plot was the 92 Islamist terror plot against the U.S. homeland since 9/11 and at least the 39th foiled by a sting operation.

With the rise to 92 Islamist attacks and plots, the trend of increased terrorism in the U.S. continues. There have been 28 terror attacks and plots since the start of 2015 and 11 so far in 2016.

Since July 2015, seven successful terror attacks have occurred, constituting over half of the 13 total successful attacks the U.S. has faced since 9/11. These three recent plots and attacks were also all homegrown—meaning the terrorists radicalized while in the U.S.—bringing the total number of homegrown plots to 81 out of the 92 total.

With the threat of terrorism remaining high, the U.S. must continually improve its counterterrorism capabilities. Enhancing cooperation between federal and local law enforcement, improving community outreach by local government, and ensuring that intelligence and law enforcement agencies have the resources and tools they need to find terrorists are critical elements to stopping terrorists before they strike.

The U.S. must be vigilant now more than ever.