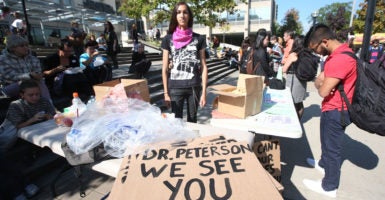 Cassandra Williams, a student union member at the University of Toronto, poses in front of sign at a free speech protest centered on professor Jordan Peterson. (Photo: Vince Talotta/Toronto Star/Newscom)

A psychology professor at the University of Toronto who is protesting a law that would force him to use certain pronouns for transgender and other gender nonconforming individuals says the school is trying to “silence” him.

“The university, yesterday, basically told me to silence myself,” Jordan Peterson told The Daily Signal. “That’s the second warning letter.”

Peterson has been a vocal opponent of a measure before Canada’s Parliament known as C-16, which would amend the nation’s human rights and criminal codes to make it illegal to discriminate based on gender identity and gender expression.

If passed, failure to refer to a person by the preferred pronoun or refusing to hire someone based on gender identity could qualify as discrimination and be punishable by law.

In a phone interview with The Daily Signal, Peterson said he has no problem with addressing people “as whatever gender they appear to be presenting themselves as.”

Peterson, a clinical psychologist, is a tenured professor.

What Peterson takes issue with, however, is the Canadian government potentially forcing him to speak in a manner that reflects a particular ideology, such as using the genderless pronouns “zie” or “hir.”

“The law should be very careful when it mandates what people have to say,” Peterson said, adding:

That’s the fundamental issue here. The mistake of this legislation is, it’s an attempt to force people to utter certain words that are not of their choosing. There’s a big difference between being required to not say something, and being required to say something. It’s a different category of law. One is closing your mouth. The other one is putting a hand inside you and forcing you to be a puppet. “The law should be very careful when it mandates what people have to say,” Jordan Peterson says. (Photo: JordanBPeterson.com)

As part of his opposition to C-16, which currently is in committee, Peterson got involved in free speech rallies, published a video series online, and wrote articles explaining his stance.

Some students and other members of the University of Toronto community took immediate offense to Peterson’s remarks, telling school leaders they found his comments “unacceptable, emotionally disturbing, and painful.”

Some fear for their safety because of his perspective, two university officials said in a letter to Peterson. David Cameron, dean of the Faculty of Arts & Science, and Sioban Nelson, vice-provost for faculty and academic life, wrote:

Some members of the university community report that the statements and the invective that has followed in the ensuing commentary and debates on social media have caused them to fear for their safety on the university campus.

The university first warned Peterson to stop making “discriminatory” remarks in an Oct. 3 letter from Susanne Ferber, chairwoman of the Department of Psychology, who wrote:

The Daily Signal sought comment from the University of Toronto, but did not receive a response by deadline.

The impact of your behavior runs the risk of undermining your ability to conduct essential components of your job as a faculty member and we urge you to consider your obligations as a faculty member to act in a manner that is consistent with the law and with university policy.

Peterson’s tenure status provides “some protection” from being fired, he said, “but the limits of that can always be tested.”

The university officials object to what they call Peterson’s “discriminatory intentions”—that, as a matter of principle, he has said he’d refuse to comply with rules or laws dictating pronoun usage.

“You should also be aware that many members of the university community are concerned and distressed about the declarations of your discriminatory intentions,” Cameron and Nelson write.

The letter also cites the Ontario Human Rights Code, which already bans discrimination based on gender identity and expression. The public university is located in Toronto, the capital of Ontario.

“Depending on the context, if personal pronouns are being used, the refusal by a teacher or colleague to use the personal pronoun that is an expression of the person’s gender identity can constitute discrimination,” the university officials write.

Replying on Thursday to The Daily Signal’s request for comment, Althea Blackburn-Evans, director of media relations at the University of Toronto, said of Peterson:

His views are his own and he’s entitled to have those views. Academic freedom is at the core of any university, and so we fully support the ability of any faculty member to speak out and share their views. But faculty members also have a responsibility to follow the laws that protect against discrimination. We do expect all members of our community, including Professor Peterson, to do that and to create a learning environment that’s free from discrimination.

Peterson said he doesn’t intend to stop speaking out on the issue, and warned that political correctness is spiraling out of control, particularly in the U.S.

“This has also happened in New York City, where you can be fined $250,000 for misgendering someone,” he said.

Under the New York City policy, landlords, employers, and businesses face civil penalties up to $125,000 per violation and up to $250,000 “for violations that are the result of willful, wanton, or malicious conduct.”

Peterson said he was discouraged by the thought of losing his job, and possibly losing his license to practice psychology. He said the situation has been hard for his family to bear.

On principle, however, Peterson told The Daily Signal he refuses to be silenced, and knows that as a result, he stands a real chance of losing his job and livelihood:

I think the university will send me a third warning letter, because I think they’re getting the documentation in order, and then I think there’s a reasonable probability that they’ll take action against me. And I think there’s a nontrivial possibility that I’ll be held up in front of the Ontario Human Rights Tribunal. I’m obviously prognosticating with regards to something I can’t predict, but the university did yesterday tell me to silence myself, and I didn’t expect them to do that.

This story has been updated to include a comment from the University of Toronto.