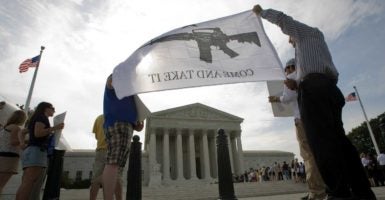 The Second Amendment has come under siege in the courts. (Photo: Chuck Kennedy/MCT /Newscom)

The current presidential election notwithstanding, there are very few topics that generate as much passionate debate as the Second Amendment and gun control.

Every time a tragic event occurs, the left calls for a renewal of the Federal Assault Weapons Ban and other restrictive gun control measures, claiming that the proliferation of firearms in this country is responsible for a disproportionate amount of violence and poses an ongoing threat to public safety.

Ever since 2008, when the U.S. Supreme Court held in District of Columbia v. Heller that the Second Amendment provides an individual right “to keep and bear Arms,” gun control activists have been trying to narrow the scope of that right (with considerable success in the lower courts).

They have attempted to get the Supreme Court to overturn Heller and its 2010 decision in McDonald v. City of Chicago, which extended Heller to state and local jurisdictions, both 5-to-4 decisions. Indeed, as Justice Antonin Scalia noted in his majority opinion in Heller:

Undoubtedly some think that the Second Amendment is outmoded in a society where our standing army is the pride of our nation, where well-trained police forces provide personal security, and where gun violence is a serious problem. That is perhaps debatable, but what is not debatable is that it is not the role of this court to pronounce the Second Amendment extinct.

With the death of Scalia, however, the left may get its wish, depending on who is ultimately confirmed to replace him. The Second Amendment is on shaky ground, and gun control activists continue to argue that America’s firearms policies contribute to violence, even though violent crime rates have fallen over the last 25 years while gun ownership has increased dramatically, and even though most gun violence occurs in areas that have some of the strictest gun control measures.

What is the history of the Second Amendment, and does it have an enduring value today? Are gun control measures effective at preventing violence or do they end up doing more harm than good? Is there a gun problem in America and how do we separate fact from fiction?

All of this and more will be discussed at The Heritage Foundation on Oct. 19, as part of the Meese Center’s sixth “Preserve the Constitution” event, “The Right to Arms and the War on Guns.” For those unable to attend in person, the event will be livestreamed online.

The event will start at noon and will feature three of the nation’s leading experts on the Second Amendment: David Clarke Jr., Milwaukee County sheriff; John Lott Jr., president of the Crime Prevention Research Center (Lott will be signing copies of his latest book “The War on Guns: Arming Yourself Against Gun Control Lies,” which will be available for sale); and Nelson Lund, university professor at the Antonin Scalia Law School at George Mason University (whose latest paper for Heritage on this topic can be found here).