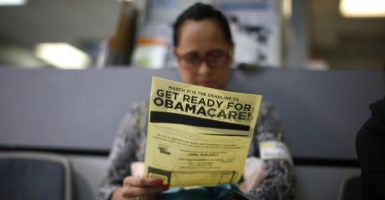 In all but one of 14 states, health insurance premiums will increase an average of at least 10 percent. (Photo: Lucy Nicholson/Reuters/Newscom)

Consumers will be hit by increases in health insurance premiums averaging 10 percent or more in all but one of 14 states where regulators have approved higher rates.

In Vermont, insurance rates will rise by an average of 5.5 percent.

Insurance companies submitted their rate proposals for 2017 over the past few months. In the lead-up to Obamacare’s open enrollment period beginning Nov. 1, regulators have begun to approve or alter the requests.

Consumers purchasing health coverage both on and off of the Obamacare exchanges will see their rates increase by an average of at least 10 percent, according to the insurer filings in 14 states and the District of Columbia.

The Obama administration has stressed that many consumers, especially those who qualify for government subsidies to pay premiums, won’t feel the full effects of the higher payments.

However, another 2.5 million who purchased plans off the Obamacare exchanges in the individual market may qualify for financial assistance if they instead buy plans on the exchanges. Those who receive subsidies could end up paying monthly premiums of less than $75, Burwell said.

But Burwell didn’t address the nearly 10 million Americans who purchase plans sold in the individual market and don’t qualify for a subsidy.