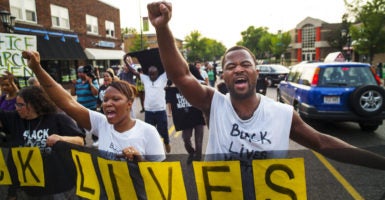 An active community member and a cultural liaison in his hometown of St. Paul, Minnesota, it was only natural for Rashad Turner to take on a leadership position with Black Lives Matter.

So when the opportunity came to organize a local chapter, he took it.

But even Turner will admit that some of the tactics he employed while heading Black Lives Matter St. Paul were controversial. His chapter caused disruption, blocked trains, and almost shut down a marathon. His actions fueled resentment among police, with some accusing him of inciting violence.

The tipping point occurred in August, when outside the Minnesota State Fair, Turner and his St. Paul Black Lives Matter chapter were caught on video chanting, “pigs in a blanket, fry ‘em like bacon,” referring to police.

The video caused a national controversy, and at the time, Turner defended it. Today, looking back, Turner expressed a sense of regret. “I stand by every human being’s right to free speech,” Turner said, “but of course there are times when we all wish things had been said differently.”

When he joined Black Lives Matter, Turner thought he had found his calling. A criminal justice major at Hamline University, it felt like a perfect fit. But in a turn of events, just days after that controversial protest, Turner, 31, abruptly stepped away from the movement.

“When I heard,” he said, “I decided to run as fast as I could the other way.”

‘The Wrong Side of History’

This summer, both Black Lives Matter and the NAACP quietly released education platforms calling for an immediate moratorium on charter school growth. Charter schools are run with public funds and are tuition-free for students, but its operators are given freedom with decisions involving curriculum, culture, budget, hiring, and firing.

Nationally, charter schools have shown a remarkable ability to outperform traditional public schools and close the achievement gap between white and black students in urban areas such as Boston, the District of Columbia, Newark, and New York City.

However, not every charter school is the same, and some are struggling to stay open.

But where they’re succeeding, Turner said, he believes parents should have that option.

“To hear Black Lives Matter national and NAACP national come out with a moratorium on charter schools put me on the opposite side of the table, and I believe it put them on the wrong side of history,” Turner said.

In early September, Turner announced he could no longer associate himself with Black Lives Matter.

“I don’t ever want to feel like I’m misleading people,” he said, explaining his decision to leave:

I know a lot of people in the community look up to me for answers, for guidance on issues of social justice, whether it be police brutality or the inequities in our educational system. I needed to be able to do what was right, I don’t want to associate myself with people who feel that parents shouldn’t have choice. Turner says he’s not scared of confrontation for the sake of his daughter, or other children. “Any person that feels like parents should be in total control of their education has to be up on this type of stuff, be very diligent, and if that means calling people out, that’s what we have to do.” (Photo: Rashad Turner)

‘The School Doesn’t Meet Their Needs’

Turner has an 8-year-old daughter, and although she isn’t enrolled in a charter school, he said other children still deserve to have that right.

“My daughter, she goes to a district school,” Turner said. “The school serves her fine. But there’s tons of kids in that school, black boys in particular, who the school doesn’t meet their needs. It’s those types of students that we need to make sure we’re serving to the highest quality school with highly effective teachers. To me, there’s no one in their right mind that should say I as a parent or the next parent shouldn’t have the greatest say and the most opportunity in choosing where their kid goes to school.”

“I can’t say [Black Lives Matter and the NAACP] is directly [receiving money from the unions], but I would definitely say that financial gains are indirectly given to Black Lives Matter, whether that be directly from the Saint Paul Federation of Teachers or its members,” he said.

The tactics employed by the teachers’ unions, he added, are sometimes questionable. “Our Saint Paul Federation of Teachers will pay for a family’s groceries and on its face, it might seem like that’s a good thing to do, but, when they pay for that family’s groceries, now that family’s wearing Saint Paul Federation t-shirts and is given a script of what to say to benefit the union.”

The Daily Signal reached out to the Saint Paul Federation of Teachers and Education Minnesota. Education Minnesota did not deny that its local chapter sometimes pays for families’ groceries, but neither organization agreed to an interview.

Today, Turner no longer has a relationship with Black Lives Matter. Instead, he was hired as the director of community engagement with Minnesota Comeback, an organization whose goal is to enroll all children—especially students from low-income backgrounds—in “rigorous and relevant schools that prepare them to thrive in college, career, and community.” Eventually, he hopes, groups like Black Lives Matter and the NAACP will change their minds on the charter school issue.

“We still have some time to get the truth out there and really paint a more accurate picture for families,” he said. Before stepping down from Black Lives Matter, Turner said he had a feeling that the movement “had been hijacked.” (Photo: Rashad Turner)

When he was just 2 years old, Turner’s father was shot and killed, he told The Daily Signal, adding that his mother, who was still a teenager at the time, got caught up in drugs and abandoned Turner and his younger brother. His grandma took them in, and ever since, Turner sought revenge—not from the cops, but from criminals on the streets. After graduating college, he said he enrolled in a police training program in St. Paul “to keep other people’s fathers from being killed.”

But after going through a few months of training, Turner says he decided that policing was not for him.

Turner also had several negative experiences with police, resulting in him being charged with domestic assault, which later was downgraded to disorderly conduct when he was convicted, and misdemeanor possession of a BB gun.

“Any mistakes I’ve made in the past, I make sure that I’ve grown from it, learn from it, and pay it forward,” Turner said.

Instead of joining the police force, Turner became a cultural liaison for African-American students. It was during that time that he became familiar with the education system, and decided that poor schools were largely to blame for his community’s problems.

Despite his passion for criminal justice and police accountability, Turner said that Black Lives Matter taking a stance against charter schools made it easy for him to step away. Because in the end, he said, education reform will initiate the greatest change.

“If we can reform our education system, if we can make sure that every student has a high quality school to attend that meets their needs, I think that we can eliminate a lot of the ills that we see in the world,” he said, adding:

I think [education] is the most important change that could happen.

This article was modified to clarify Turner’s past police and school record.