This Is the Percentage of Millennials Who Believe George W. Bush Killed More People Than Stalin 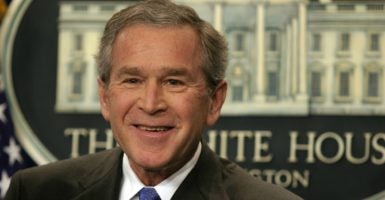 The Victims of Communism Memorial Foundation released its first “Annual Report on U.S. Attitudes Towards Socialism” Monday. The survey showed a distinct generation gap regarding beliefs about socialism and communism between older and younger Americans.

For example, 80 percent of baby boomers and 91 percent of elderly Americans believe that communism was and still is a problem in the world today, while just 55 percent of millennials say the same.

When asked their opinion of capitalism, 64 percent of Americans over the age of 65 said they viewed it favorably, compared to just 42 percent of millennials.

The survey also revealed a general lack of historical knowledge, especially among young adults. According to the report, one-third (32 percent) of millennials believed that more people were killed under George W. Bush than under Joseph Stalin.

When millennial respondents were asked about their familiarity with various historical communist figures, 42 percent were unfamiliar with Mao Zedong, 40 percent with Che Guevara, and 33 percent with Vladimir Lenin—three notorious figures in communist regimes. Among millennials familiar with Lenin, 25 percent viewed him favorably.

“It is because of such widespread ignorance about communism that we formed the Victims of Communism Memorial Foundation, which is dedicated to telling the truth, the whole truth, and nothing but the truth,” said Lee Edwards, a distinguished fellow in conservative thought at The Heritage Foundation and co-founder of the Victims of Communism Memorial Foundation, an organization that seeks to “memorialize, educate, and document the grim history of communism around the world.”

“Ronald Reagan said that ‘freedom is never more than one generation away from extinction,’” he added. “It is the solemn obligation of this generation to educate the rising generation about the manifold victims and crimes of the deadliest ism of the last 100 years—communism.”

The survey was conducted among 2,300 people, with a margin of error of 2.8 percent and a 95 percent level of confidence.