The Many Illegal Immigration Failures of the Obama Administration 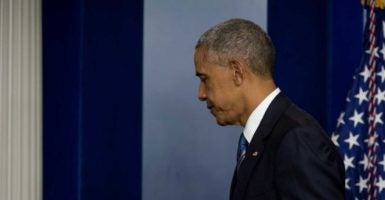 The Obama administration is secretly delaying deportations for several years.

That’s according to a bombshell report from The New York Times, which interviewed Department of Homeland Security employees as well as immigration judges and lawyers. And it’s far from the only failure this administration has when it comes to enforcing our immigration laws.

Since 2014, over 56,000 immigrants from Central America have had their deportations intentionally delayed. This means that nearly one-fourth of the recent waves of illegal immigrants from Central America have legally been allowed to stay in the United States for years–even though they are supposed to have been deported as President Barack Obama promised.

The reason for this about-face? Many illegal immigrants are and were instructed simply to “show up” in court or Immigration and Customs Enforcement offices at a later date. In this case, the administration supposedly planned to fit many of these illegal immigrants with GPS tracking anklets, also known as an alternative to detention (ATD).

It should come as no surprise, however, that many failed to appear for their day in court, and disappeared into the U.S.

If anyone thinks that these lapses in enforcement are an isolated incident, think again. These delays are one major problem in a string of recent failures concerning immigration.

Homeland Security employees have confirmed both the existence and accuracy of an internal report, detailing the Customs and Border Protection apprehension rate. This rate shows how effective DHS has been at catching people at the border, a statistic that is extremely difficult to gauge.

Congress is demanding that the Homeland Security department release the internal report immediately. Several members, including Rep. Martha McSally, R-Ariz., have accused the agency of failing to publish the report because of political motivations, which the department adamantly denies.

Another alarming failure was made public last month. At least 1,700 immigrants, who should have been deported, were accidentally granted citizenship by U.S. Citizenship and Immigration Services (USCIS).

Homeland Security Secretary Jeh Johnson recently testified in front of Congress and admitted he was unsure if any of the people who were mistakenly granted citizenship are from Syria or Iraq. According to U.S. Sen. Ben Sasse , R-Neb., at least two of the people accidentally granted citizenship had been previously referred to the FBI as terrorists by the inspector general.

So, across all three immigration agencies—Customs and Border Protection, Immigration and Customs Enforcement, and USCIS—serious mistakes and failures are occurring. Yet the Obama administration continues its nonenforcement policies with abandon.

Major reforms are needed. This includes timely placement of GPS tracking anklets on illegal immigrants, to make certain they will show up on their day in court. ATD is an effective and cost-saving method of ensuring illegal immigrants show up at the court hearings—when enforced correctly.

The Department of Homeland Security’s digitization of immigration records and processes is well overdue. And Homeland Security should be reporting honest statistics to Congress and the American people regarding how effective—or not—it is.

Delayed deportations, wrongly granting citizenship, and hiding statistics compromise our immigration system. There is no excuse for such negligence and failure.