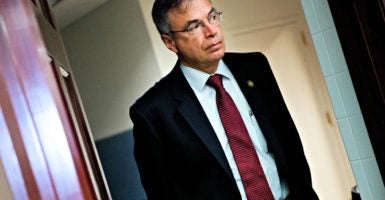 Rep. Andy Harris, R-Md., pictured herein says he wants to be a unifier as chairman of the Republican Study Committee. (Photo By Tom Williams/CQ Roll Call)

Like most Americans, but unlike most of the other 434 members of the House of Representatives, Andy Harris pulls a lengthy commute to work each day.

One way and without traffic, the Maryland Republican says he can go door to door in an hour and a half from his home in Cockeysville to his office on Capitol Hill. But if he hits traffic, it takes almost three hours just to get to work.

Harris doesn’t mind. As a physician, he says he’s used to long hours in the operating room and, as a single father, the 60-mile trek is necessary for him to get home to his 16-year-old son. Plus it gives him time to think.

And while doubling back on the Baltimore-Washington Parkway daily in his Buick or Jeep, Harris says, he believes he diagnosed the predominant ill ailing the House GOP conference: conservative infighting. He also prescribed a solution: himself.

Harris, 59, is challenging Rep. Mark Walker, R-N.C., for the chairmanship of the largest conservative caucus in Congress, the Republican Study Committee.

Examining the 114th Congress in its waning days, the Maryland doctor argues that strained relations between the RSC and the smaller Freedom Caucus—the two predominant factions that together make up the majority of the Republican conference—did harm to the conservative movement.

“Lack of unity among conservatives has made it very difficult to be effective in steering leadership in the rightward direction,” Harris told The Daily Signal.

Harris, the only Republican in Maryland’s congressional delegation, notes that the two GOP caucuses often take similar policy positions but adopt different and sometimes counterproductive strategies. He points to policy fights over spending levels and a stopgap spending bill as examples.

In February, the mammoth 176-member RSC was the first caucus to oppose a budget with increased spending. And in July, RSC Chairman Bill Flores, R-Texas, was one of the first to call for a long-term continuing resolution that would avoid a last-minute spending deal.

But conservatives lost on both fronts.

“Despite having the RSC take conservative positions,” Harris says, “the House and Republican conference didn’t end up taking them. It was partially a result of conservative disunity.”

Though the groups share members and similar missions, an ongoing story of sibling rivalry has developed.

Some accuse the RSC of developing an overly close relationship with Republican leadership. Others blame the Freedom Caucus for spoiling conservative strategy by being overly aggressive.

Harris says he believes there’s enough blame to go around. He knocks the RSC for allowing a perception to develop that it no longer offers a conservative check in Congress. And he faults some conservatives in the Freedom Caucus for being “impatient.”

“They know what the conservative policy is and understandably they want it to be implemented, but they sometimes miss the long picture and when they do, they make themselves less likely to be involved in the process,” Harris said of conservatives.

The divide between the two factions seemed to reach its widest point at the end of August when members of the Freedom Caucus began talking openly about breaking things off with the Republican Study Committee.

Two weeks later, Harris entered the race for RSC chairman, running as a unity candidate and plugging his membership in both groups. The doctor has argued that he is ideally suited to stitch the conservative movement back together “under one banner.”

That election doesn’t occur until Nov. 17, but Harris’ bid already seems to have helped stem any Freedom Caucus exodus. In order to vote in the election of a new RSC chairman, lawmakers must first renew their membership. So far, only four members have announced plans to cancel their membership.

But while Harris may have brought some wayward Freedom Caucus members back to the RSC fold, it’s unclear whether either candidate has pulled ahead. Neither Harris or Walker would comment on their chances, but supporters of both claim the lead.

“Andy is clearly ahead,” a Republican member who is backing Harris claimed. “Solid, solid numbers—without fudging—put him ahead at least 20 votes.”

Noting Harris’ three terms in Congress to Walker’s one, the lawmaker told The Daily Signal that “the chief differential between the candidates” is experience.

Another Republican lawmaker, who supports Walker, scoffed at that count as “idle talk.” Adding that the North Carolina Republican entered the race a month earlier than Harris, the member said Walker enjoys broad support in the RSC.

“Andy does not have the warmest personality, some might consider him prickly, and he’s never been viewed as a team player,” the Walker ally told The Daily Signal. “He’s kind of starting from scratch. A lot of people are supporting Mark or taking a wait-and-see attitude.”

While Harris insists his strengths are experience and relationships within the GOP conference, he is familiar with controversy.

Harris earned the ire of D.C. residents for temporarily extinguishing the legalization of marijuana. He incited the anger of House Democrats for opposing the naming of a post office after poet Maya Angelou. And he incensed demonstrators after saying the nation needed to “get over” the Trayvon Martin verdict.

But Harris has a ready response for each incident.

As a doctor, he says the medical literature demonstrates the risk of legalized pot. As the son of Eastern European parents who fled the Soviet Union, he says a communist poet shouldn’t be honored. And as a congressman, he says the Justice Department’s investigation of the Martin shooting was “purely political.”

Whether or not RSC members accept his leadership, Harris says he’s confident in his diagnosis of the dilemmas facing the Republican conference. He warns that with either Hillary Clinton or Donald Trump as president-elect, challenges to GOP unity still will be daunting when the next Congress convenes Jan. 3.

“If it’s a Trump presidency, we will have to keep Mr. Trump to his claims of conservative principles,” Harris said. “But if it’s Secretary Clinton, we’re going to have to lay the groundwork for why she shouldn’t be re-elected.”

Harris sounds confident that he is up for either.

“To be successful in the 115th Congress,” Harris said, “conservatives have to be united and I think I can do that.”