In 3 Years, His Insurance Premiums Double as Options Decline Under Obamacare 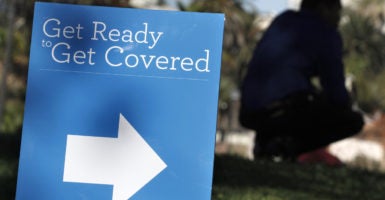 Warren Jones, a veterinarian from Kansas City, Missouri, will see his monthly health insurance premiums top $716 next year. Many consumers are facing double-digit rate hikes and a decline in the options available both on and off the exchanges. (Photo: Jonathan Alcorn /Reuters/Newscom)

For the past 15 years, Warren Jones has had the same health insurance plan with Blue Cross and Blue Shield of Kansas City.

But over the years, Jones, of Kansas City, Missouri, has watched the coverage offered in his policy “erode” over time.

First, the company got rid of the dental and vision coverage he had.

Then, Jones’ deductible increased—to $2,500—for his plan alone.

But perhaps the most significant change for Jones, a veterinarian, has been the rising cost of his monthly premiums.

For 2017, Blue Cross and Blue Shield of Kansas estimates that Jones will pay $716 each month for his premiums—a 45.8 percent increase—according to a letter the insurer sent him.

“You can’t keep doing this because people’s wages don’t increase by that amount,” Jones told The Daily Signal. “Nobody’s wages are increasing, so it’s taking a bigger chunk of the budget.”

“That’s the scariest part,” he continued. “It takes a bigger chunk of the budget, and there’s no relief in sight.”

Like millions of other Americans nationwide, Jones, 55, doesn’t buy his insurance on Obamacare’s state and federal exchanges.

And even if he did, he wouldn’t qualify for the subsidies that lessened the cost of health insurance for 7.3 million Americans who received the tax credits last year, according to regulatory filings.

Instead, the veterinarian falls into an overlooked subset of consumers who pay full price for their health insurance in a time of skyrocketing premiums and deductibles.

They don’t qualify for the tax credits offered under the health care law, and they don’t receive their coverage from employers, since many are self-employed.

“I have seen so many people, including those who work for small businesses that can’t offer group insurance and the self-employed, who started their own little business struggling to buy their individual policy or buy for their family. What are their options?”said Beverly Gossage, a broker who has worked in the Kansas City area for 14 years.

“Do they give up being self-employed? Maneuver taxes to make less than the income threshold to get subsidies?” Gossage said. “They don’t want to do that, but they’re being pushed to do that. I get this question every day—‘What am I supposed to do?’”

Gossage ran as a Republican for Kansas insurance commissioner in 2014.

Over the past few months, insurers have been submitting rates to state regulators for the 2017 benefit year.

In most states, companies are requesting double-digit rate hikes for those selecting plans sold in the individual market both on and off the Obamacare exchanges.

Experts say insurers are playing catch-up after setting rates too low in the early years of the health care law and enrolling a sicker—and costlier—population than anticipated.

“A lot of insurers didn’t understand that the market was going to be skewed in terms of income and health status as severely as it was,” Ed Haislmaier, a senior research fellow in health policy studies at The Heritage Foundation, told The Daily Signal. “Generally, the pool was much worse than anybody expected because of things the administration did that made it worse.”

In response to questions about the growing cost of health insurance for consumers who buy plans sold in the individual market, the Obama administration has said that many Americans are shielded from premium hikes since they buy coverage on the exchanges and receive a subsidy from the government.

Many of the exchange enrollees who qualify for a subsidy may end up paying as little as $75 per month in premiums, Health and Human Services Secretary Sylvia Mathews Burwell said earlier this month.

But that’s not the case for people like Jones and the 10 million others paying full price for their coverage.

“The traditional individual market, which consisted largely of middle-class people who are self-employed, those people are hooked onto this,” Haislmaier said. “It’s kind of a situation where you have an anchor that’s too big, and it’s pulling the boat under.”

Jones is considering selecting a new health insurance plan altogether, but because Missouri hasn’t yet approved rates for 2017, he’s unsure if he’ll even be able to find a cheaper alternative.

“The big thing is the unknown still,” Jones said. “But we know we’re getting inundated with increases in premiums.”

The Missouri man said he is familiar with Blue Cross and Blue Shield of Kansas City, and switching to another carrier may leave him with even less coverage.

“You get a comfort level, and at least you know what you’re getting,” Jones said. “If I had to change insurance, you miss the changes that occur. You don’t know what you’re signing up for.”

While Missouri residents like Jones are confronting a spike in rates, consumers across the state’s western border also are facing fewer insurers to choose from.

Among the insurers that will continue to sell coverage in Kansas, the number of plans they’re offering both on and off the Obamacare exchange is decreasing.

Many insurers, large and small, have decided to leave the exchanges after losing millions of dollars last year; they either withdrew from states altogether or decreased the number of policies offered.

According to an August study from the Kaiser Family Foundation, six in 10 counties may have a maximum of two insurers on the exchanges next year. Additionally, five states will have one insurer selling coverage on an exchange.

In Kansas, 17 carriers sold policies in the state before Obamacare’s implementation, Gossage said.

This year, the majority of consumers in Kansas will have only two insurers to choose from on the exchange, according to the Kansas Department of Insurance.

Those buying plans sold in the individual market off the exchange have five insurers, according to the state.

It’s a similar landscape in Missouri, where four insurance companies are selling coverage on the exchange, according to regulatory filings.

Off the exchange, consumers can choose from at least seven different companies.

Gossage said that over the last few years, she has seen insurers significantly lessen the number of policies they’re offering.

“What we did is we went from a very vibrant, competitive marketplace with extremely low rates and lots of different plans to pick from to over-overregulation with the type of plan you have and to mandates placed on insurance companies which led to high premiums and fewer carriers in the marketplace,” Gossage said.

While much of the focus has been on the declining number of choices for consumers selecting coverage on Obamacare’s exchanges, those with plans sold in the individual market off the exchanges are hurting, too.

Rochelle Bird, who is self-employed and lives in Overland Park, Kansas, has had a policy through Coventry, a subsidiary of Aetna, for two years.

Late last month, Bird received a letter from Coventry notifying her that her policy will cease to exist at the end of the year.

“We may still offer coverage in your area, but most of the options available today will not be available for 2017,” the letter stated.

Bird said she wasn’t surprised to learn her policy was being canceled. Rather, she expected it.

“I know that this act has created chaos,” she said of Obamacare, formally the Affordable Care Act. “When I get a thing [in the mail] saying that my rate has changed, I know it’s 50-50 when I open it. It’s either a letter saying this is what you’re going to pay starting Jan. 1, or we’re no longer offering that plan anymore. It wasn’t a total shock to me.”

Bird said she has started researching other policies with different insurance companies, but because officials in Kansas only recently finalized rates, she hasn’t yet made a final decision on her coverage for next year.

She has, however, set expectations for the terms of her next plan.

“I am now faced with the fact that unless something changes, there will be one health care provider presumably with two different health plans that I will have a choice of [while] living in the state of Kansas,” Bird said. “That’s absurd. How is that helpful?”

Bird herself didn’t purchase her plan on the Obamacare exchange, and she wouldn’t qualify for a subsidy if she did.

While going without insurance and paying the fine—$695 per adult or 2.5 percent of household income for 2016—isn’t an option for her, it is for other Kansas and Missouri residents.

Jessica Huayaban of Olathe, Kansas, and her husband, Joel, each purchased plans in the individual market off the exchange in 2014.

Jessica, 36, bought a plan through Humana, and her husband, 35, through Coventry.

The couple, who own a painting and remodeling company, previously were uninsured and saving money each month to pay for a costly knee surgery Joe needed.

Jessica and Joel had insurance before, but when the recession hit in 2009, coverage was too expensive so they decided to go without.

“It was way cheaper to cash pay,” she said of the years they needed medical services but didn’t have insurance.

In 2014, when Obamacare was implemented, the couple purchased their own coverage, but only because the law required it.

“I wasn’t getting [insurance] for even the coverage part,” Jessica told The Daily Signal. “I was getting it for the compliance.”

Over the past two years, the monthly premiums Jessica pays for her Humana plan have gone up minimally, but her plan has a high deductible.

Then, last month, the 36-year-old mother received a letter from her insurer notifying her they’re canceling her policy.

“This is just something that continues to happen, and I don’t have a choice in it,” Jessica said.

She said she isn’t sure whether she and her husband will purchase plans on Obamacare’s exchange when the open enrollment period opens in November.

And although she may qualify for a subsidy, the young mother fears she’ll be stuck with an expensive tax bill when she files with the IRS for 2017, since her income—she is self-employed—fluctuates drastically from month to month.

“All of it is so backward,” she said of the health insurance system.