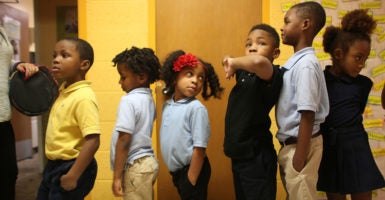 Students from charter schools nationwide find themselves in the middle of a dispute between the NAACP and education reformers. (Photo: Kyndell Harkness/Zuma Press/Newscom)

The National Association for the Advancement of Colored People (NAACP) ratified its stance against charter schools on Saturday, passing a resolution that calls for a halt to the growth of any new charter schools throughout the U.S.

The position put the nation’s oldest and largest civil rights organization at odds with many inside its own community, including the Black Alliance for Educational Options, which helped organize a coalition of 160 black education and community leaders who urged the civil rights group to reconsider its moratorium.

After NAACP board members voted on Saturday to approve the resolution, Jacqueline Cooper, president of the Black Alliance for Educational Options, said she was “stunned.”

“We are absolutely stunned that the NAACP voted to put distortions, lies, and outdated ideologies about charter schools above what is in the best interest of our children,” Cooper said in a statement. “It is inexplicable to me that such a storied organization, responsible for leading a powerful civil rights movement to tear down barriers for generations of black people, would erect new ones for our children.”

In explaining its decision to ban charter school growth, Roslyn Brock, chairman of the national NAACP board of directors, said:

“The NAACP has been in the forefront of the struggle for and a staunch advocate of free, high-quality, fully and equitably funded public education for all children. We are dedicated to eliminating the severe racial inequities that continue to plague the education system.”

Charter schools are public schools that are tuition-free, open to all students, and run with public funds. However, the schools are managed privately and their operators are given the freedom to be more innovative with decisions involving curriculum, culture, budgeting, hiring, and firing.

In some urban areas such as Boston, Newark, New York City, and the District of Columbia, charter schools have greatly outperformed traditional public schools. In areas such as Fort Worth, Phoenix, and Las Vegas, charter schools are all struggling to outperform their district counterparts, according to a study by Stanford University’s Center for Research on Education Outcomes.

We are calling for a moratorium on the expansion of the charter schools at least until such time as:

The NAACP has support from the Black Lives Matter movement, which released a similar policy platform earlier this summer. It also has the backing of teachers’ unions, including the American Federation of Teachers, whose president, Randi Weingarten, issued a statement that reads in part:

Charters were intended as part of—not a replacement for—the public school system. But some who promote and fund charters today have other designs, and the explosion of unaccountable charters has drained resources for children, forced the closing of neighborhood schools, and destabilized districts and communities in cities like Philadelphia and Detroit. In many places—the state of Ohio being one particularly egregious example—lax oversight results in rampant fraud, waste, and mismanagement. And in places from New York City to California, charters have been caught discriminating in their admissions to keep out high-needs students.

On Saturday, black parents, grandparents, and education leaders protested the NAACP’s board meeting in Cincinnati, Ohio. According to The Cincinnati Enquirer, Sarah Carpenter, a grandmother of 13, said during demonstrations:

We have charter schools that are good. We are not against public schools. We want good schools of any type. Where was the NAACP when so many public schools were failing our children?

Responding to the demonstrations, Cornell Williams Brooks, president of the NAACP, told the Enquirer that the resolution “does not call for the doomsday destruction of all charter schools in existence now.”

“What it does call for is let us have a season of reason, a pause in the expansion while we figure this out,” Brooks added.

“The NAACP, a proud organization with a historic legacy of expanding opportunity for communities of color, now itself stands in the schoolhouse door, seeking to deny life-changing educational opportunities to millions of children whose parents and families desperately seek alternatives to schools that have failed them for too long,” he said, adding:

Public charters schools throughout the country are creating new pathways to college and career that were previously unavailable. The idea that the NAACP would support a blanket moratorium that would apply across-the-board to all charters, including schools like Urban Prep that send 100 percent of its graduates to college, is a tragic contradiction of what the NAACP has traditionally stood for. The NAACP faces a choice: cling to policies of the past that have failed black children for decades, or embrace the future and the innovative practices that will create hope and opportunity in places where neither is present.