Cuban Dictatorship Governed More Severely During 2 Years of US Engagement 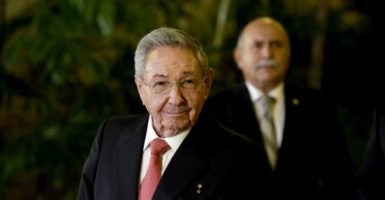 In the waning months of his presidency, President Barack Obama issued a directive he called “irreversible,” expanding transactions related to Cuban pharmaceuticals, increasing transportation, and greater commercial opportunities between the United States and the communist dictatorship.

Part of the expanded cooperation will include doing business with state-owned enterprises on property confiscated from Americans during the revolution, said Jason I. Poblete, an attorney representing American families who saw their homes and businesses taken by the Cuban government.

“Access to U.S. markets is a privilege, not a right,” Poblete told The Daily Signal in a phone interview. “The U.S. will be authorizing engaging with businesses stolen from Americans.”

Obama’s directive marks an expansion on his December 2014 move to normalize relations with Cuba. Notably, the directive will lift rules to make it easier to import Cuban cigars and rum by removing the monetary value restrictions on what people can bring to the U.S. when returning from Cuba.

Americans have made 5,913 certified claims against the Cuban government regarding confiscated property from the 5-decade-old revolution. Of those, about 5,000 are from families, while the rest are corporations that operated in Cuba, Poblete said.

Taking steps to return property is one condition the United States placed on Cuba in order to lift the embargo. Other requirements include taking steps toward democracy and a free press. Critics complain that the Cuban government not only made no concessions, but has tightened its power grip since the Obama administration normalized relations.

“Almost two years after a policy should be enough to know what the behavior of the regime is going to be,” Cuban dissident leader Antonio Rodiles, who met with Obama in the Cuban capital of Havana this year, told The Daily Signal in a phone interview. “The Obama administration is moving ahead even though the regime has become more aggressive.”

On Friday, Obama touted his directive as building on the success.

“This directive takes a comprehensive and whole-of-government approach to promote engagement with the Cuban government and people, and make our opening to Cuba irreversible,” Obama said in a statement Friday. “These changes are representative of the progress I saw firsthand when I visited Havana to personally extend a hand of friendship to the Cuban people.”

It was during Obama’s visit in March to Cuba that the communist government made 498 politically motivated arrests, according to the Cuban Commission for Human Rights.

In the time since Obama and Cuban President Raul Castro agreed to normalize relations, the Cuban government made 8,616 politically motivated arrests in 2015, and 7,418 in the first six months of 2016, according to the human rights group. The Cuban government increased its violations of religious freedom “tenfold” according to Christian Solidarity Worldwide, with 2,300 violations in 2015, up from 220 in 2014.

“There is no such thing as dictator-down economics,” said Ana Quintana, policy analyst for Latin America and the Western Hemisphere at The Heritage Foundation.

Treasury Secretary Jack Lew insisted the directive would be a benefit for bringing prosperity to Cubans.

“The Treasury Department has worked to break down economic barriers in areas such as travel, trade and commerce, banking, and telecommunications,” Lew said in a statement. “Today’s action builds on this progress by enabling more scientific collaboration, grants and scholarships, people-to-people contact, and private sector growth.”

Lew’s comments illustrate another problem in the upbeat scenario framed by the Obama administration, Quintana said.

“There is no such thing as a private sector in Cuba,” Quintana said. “If it isn’t state-owned, what you have is the black market. The Cuban government owns and operates the rum and the cigar manufacturing.”

Under the new directive, the Treasury Department will allow Americans and Cubans to engage in joint medical research. Certain Cuban-made pharmaceuticals will be imported into the United States.

It would take an act of Congress to lift the Cuban embargo.

Rodiles said even if the 50-year-old embargo wasn’t deemed effective, the current policy is not a sufficient substitute.

“If the previous policy was not working, don’t just change the policy to something that is not gaining the results you are seeking,” Rodiles said. “There were no commitments made by the regime. They can still do whatever they want to do.”